Exactly Like Film — Very Nice. But I Wanted More.

Last night I bought and watched the new Criterion Bluray of Wim Wenders‘ The American Friend. Oh, the power and the glory of that 1.66:1 aspect ratio! The disc presents the film exactly as it looked on the big screen at Alice Tully Hall when I first saw it at the 1977 New York Film Festival. No digital tweaking, like pure film. And quite perfect in that regard. But of course I wanted a little extra. I wanted my Bluray “bump” — a subtle but noticable enhancement that makes a film seem sharper and more robust than it did in theatres. But no. Wenders (who oversaw the mastering in Berlin) and the Criterion guys have shut that down. I’m not saying there’s anything “wrong” with a Bluray looking like film. I’m saying that in my heart of hearts I’m a wee bit disappointed. Just a bit. 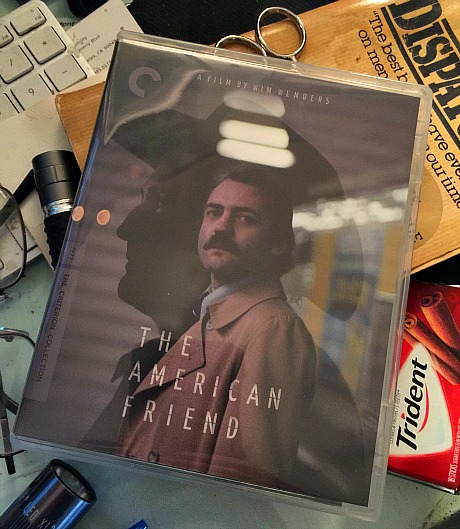 From a November 2011 post: “I felt a curiously powerful synchronicity the first time I saw Wim Wenders‘ The American Friend at the 1977 NY Film Festival. I’m not fatally ill and I’ve never performed a contract killing, but otherwise I’ve long felt a kind of dark harmony between that Hamburg waterfront, cowboy-hatted, existential noir vibe and my own moods, fears and free-floating anxieties. You know…that more-corrupted-than-you-realize Highsmith thing.

“‘I know less and less about who I am, or who anyone else is’ (a great line spoken by costar Dennis Hopper in the role of Tom Ripley) used to be my mantra. I actually laid down on a pool table once and shot several Polaroids of myself. I even once got hold of an American Friend one-sheet and pasted a photo of my own mug on top of Bruno Ganz‘s. I think I’m going to try and do that again, I’ve just decided, only digitally this time.”