Alejandro G. Inarritu‘s The Revenant opened wide yesterday. Hinterland reactions are requested. How fresh and immersive does it seem after all the big-city circulations and ricochets of the last few weeks? And what about that warm bear breath fogging up Emmanuel Lubezski‘s lens? Who saw it in IMAX, or at least on a really big screen with a grade-A sound system? 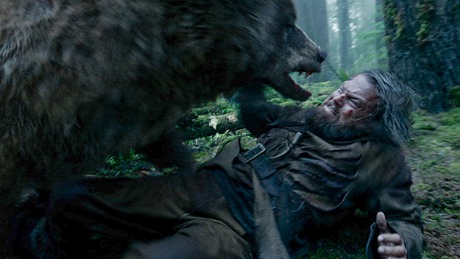 From David Thomson‘s Film Comment review, posted on 12.1.16: “The Revenant is a profound adventure, a nearly unique portrait of the extravagant desolation in nature and an absorbing argument over the fate of mankind and its big movies. I wonder how it will do, and how a holiday public will respond to it with a jubilant Star Wars in the next theater. The film may fail in some box-office ways, but that could qualify it in a tradition that includes Intolerance, Greed, Bringing Up Baby, Citizen Kane, The Night of the Hunter, Two-Lane Blacktop, One from the Heart and Heaven’s Gate.

“Photography easily cheats nature: it dwells on the light of magic hours; it clings to the sentiments embodied in landscape, horizon and sky; it is agape at spectacle, scenery and the magnificence of wilderness. From the paintings of the German-born Albert Bierstadt (1830-1902) to the films of Terrence Malick, this mood can co-opt wildness as an idealistic American state of mind. But that ecstatic framing hardly feels the cold, the cruelty, or the isolation, let alone the terror of being hunted by other creatures.

“If you want a quick lesson in commitment to external and human nature, just notice how in the bogus, gloating 70mm stupor of in-jokes in The Hateful Eight, its winter prairie is a groomed back lot where a stagecoach (as perky as a Wells Fargo ad) comes bouncing along in a conveniently snow-plowed track.

“The Revenant is also a meditation on what kind of adventure movie is possible now. Just as Inarritu’s Birdman deconstructs performance, so The Revenant is tense with self-assessment. We cannot watch without realizing that Lubezki is loyal to natural light as if it was a principle of survival. There are a few interiors and campfires, but we are in a world without artificial or theatrical light. You can see that as an aesthetic decision, but more seriously it addresses mankind’s relationship with nature before electricity and all the technologies that give us the merry schoolboy CGI that rips up the West Coast in San Andreas.

“The look of The Revenant feels hallowed and authentic; it is historic but now. No one could say it is done without conjuring. Still, Iñárritu wants to work with as little CGI as possible. When Glass is in the final stages of tracking Fitzgerald, far away behind his lone figure, a small avalanche occurs on a mountainside. Glass stops to notice it. An interviewer asked Iñárritu, whether that was CGI, and the director said, no, a helicopter had been employed to set off a real avalanche.

“At a moment of climax Iñárritu chose to have an accident, far from necessary, but eloquent just because of that: nature has its own small gestures of revenge or consequence—accumulated snow must be released, just like human wrath. More than that, the film was ready to go to some lengths to make an event feel real. At a final estimated cost of $135 million, The Revenant doubled its initial budget. This is a commercial enterprise made more perilous by adhering to actuality.”