Last night I attended a reception for Trumbo star and Best Actor contender Bryan Cranston. It happened at the Ross house, a spacious, overwhelmingly swanky abode located high above Laurel Canyon (2155 Mount Olympus Drive). The party followed a screening of Jay Roach‘s film, which began at 7:30 pm. Cranston, who looked a good 20 years younger and a whole lot healthier than he does in his Dalton Trumbo guise, was gracious and friendly to all. The film played as well as it did when I caught it last September in Toronto. “There’s nothing wrong with being an intelligent, pruned-down, HBO-level biopic — an above-average portrait of the Hollywood blacklist era, and a better-than-decent capturing of one the most gifted and industrious blacklisted screenwriters ever. A moustachioed, sandpaper-voiced Cranston portrays the stalwart titular hero; I felt completely at home with the guy. Trumbo was one of the most gifted wordsmiths in Hollywood history — a winner of two screenwriting Oscars (Roman Holiday, The Brave One) during his under-wraps period, and also the author of A Guy Named Joe, Thirty Seconds Over Tokyo, Cowboy, Spartacus, Exodus, Lonely Are The Brave.” 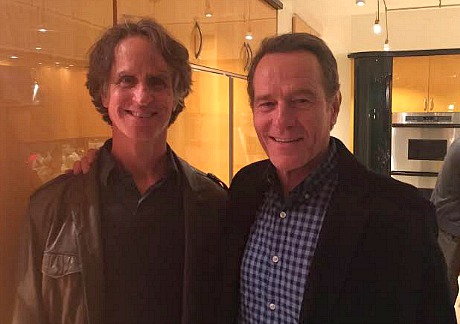