HBO is airing The Godfather Saga, which is basically a commercial-free version of what was titled The Godfather Saga when it originally aired on network television in 1977, on 1.23. The 434-minute epic (a sequential telling of the Godfather tale ending with lonely Michael in the shadows outside his Lake Tahoe home, or minus the dubious material contained in The Godfather, Part III) is also streaming on HBO Now. Well, I just watched a portion of it and it looks like shit. They may be claiming it’s streaming in high-def, but it’s not. I know exactly how good this footage can look, being an owner of the restored Blurays of The Godfather and The Godfather, Part II, and what HBO Now is showing isn’t even close. It looks “okay” but at the same time drained and fuzzy and almost VHS-like. 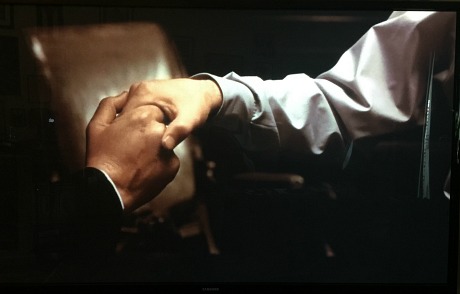 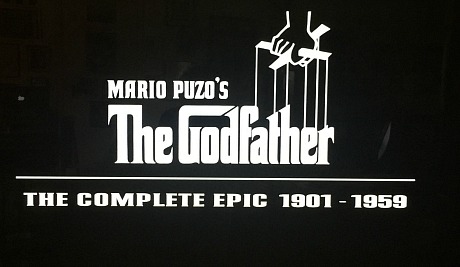 A serious Bluray version needs to be prepared and released. It shouldn’t be that hard.

Posted in August 2011: I remember watching the 434-minute Godfather Saga on NBC some 34 years ago. It played four consecutive nights, and I stopped my life to take part in it. I was like a priest doing vespers. I knew I wasn’t watching a “better” version of the first two Godfather films, and that the Saga was just longer (including 75 minutes of previously un-seen scenes) and chronological, etc. But I loved sinking into the all of it, the sprawl of it.

And it’s really not right, I feel, for Francis Coppola to stand in the way of releasing the full Godfather Saga on Bluray/DVD. All 434 minutes’ worth, I’m saying, just like before. And with no recognition or acknowledgement whatsoever of the miscarriage known as The Godfather, Part III. In the hearts and minds of serious Godfather-heads that movie never happened.

Coppola reportedly went along with assembling and airing The Godfather Saga in ’77 in order to raise money for Apocalypse Now. I’ve heard he doesn’t want The Godfather Saga out on DVD/Bluray because he wants his Godfather legacy to be defined by the theatrical versions, and because Saga doesn’t really add anything — it just expands the story and puts it in chronological order.

Well, I have news for Coppola. He doesn’t own the Godfather films or the religion (as opposed to a cult) that has grown and thrived in their honor over the last 40 years. All he did was direct them. Those efforts occupied him in 1971 and early ’72, and again in ’73 and ’74. What happened after was between the films and the public. He sired them, but they went on to make millions of connections with millions of people — a process that Coppola could only observe from the sidelines. In a sense he hasn’t really been part of it. He’s just the father.

The Godfather films belong to America, to film culture, to you and me. And whether Coppola likes it or not. that includes The Godfather Saga. He put it out there, guys like me really got into it, and he owes it to Godfather fandom to supply that version.

Not because he’s proud of this assemblage or is perhaps moderately ashamed of it, or because the Saga is any kind of richer, grander, more satisfactory telling of the 1902-1959 story — it’s not. But because we want it out there as a viewing option the way we sometimes like to pig out on pizza or ice cream, and because Coppola hasn’t the right to deny us this. He can’t make or re-make something of public importance and then put it into a cardboard box and store it in the attic and forget about it.

There are only two Godfather movies, and it’s time to re-release the most needlessly extended, wind-baggiest, absolute longest and ass-draggiest version of those classics in all their meticulous and drawn-out splendor.

January 18, 2016by Jeffrey Wells22 Comments
« Previous post
I Want To Bathe In The Hurt Again
Next post »
Nate Silver: Trump Negatives Huge Among Indies, Democrats. Oh, And Bernie Is Only Candidate With Positive Net Favorability Rating