A 1.6.06 N.Y. Times Fashion & Style piece by Unbuttoned columnist Vanessa Friedman highlighted a striking Louis Vuitton women’s wear ad featuring three female models and 17 year-old Jaden Smith, all of them wearing skirts and blouses and whatnot. Feel Jaden’s fluidity! The once-promising actor son of Will Smith and Jada Pinkett Smith had a nascent career that crested with The Karate Kid (’10), only to be killed in 2013 by M. Night Shyamalan‘s After Earth. Now he’s an avant garde, non-binary fashionista. 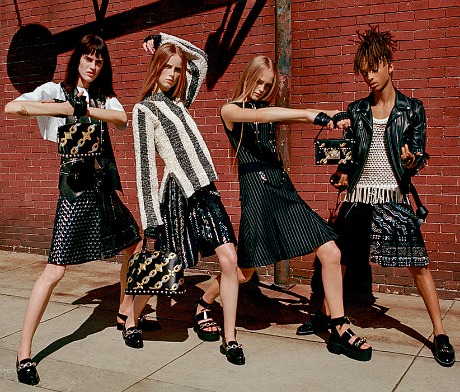 Friedman writes that “it is possible to see this as sheer sensationalism…there has been speculation that Mr. Smith, who has been wearing various bits of women’s clothes for a while now — a white skirt and black tux to a prom; a flowered T-shirt dress to Coachella and making statements such as ‘I like wearing super drapey things so I can feel as though I’m a super hero’ (in an interview in GQ) — has done it mostly as a canny play for attention, or to promote the idea of himself as a new thought leader (‘Went To TopShop To Buy Some Girl Clothes, I Mean ‘Clothes,’’ he Instagrammed last year).”

Nicolas Ghesquiere, the artistic director of Louis Vuitton, has adopted a more admiring if not solemn opinion of Jaden’s fashion sense. Smith “represents a generation that has assimilated the codes of true freedom, one that is free of manifestoes and questions about gender,” Mr. Ghesquière told Friedman. “Wearing a skirt comes as naturally to him as it would to a woman who, long ago, granted herself permission to wear a man’s trench or a tuxedo.”

Friedman: “Translation: This is the natural end stage of the fashion revolution started in the 1960s and ’70s when women took off their aprons and girdles and appropriated jeans. This posits millennials as the real heirs to the Me Generation, though it’s questionable whether many of Mr. Smith’s 2.4 million Instagram followers are also actual Vuitton customers.

“It’s not unisex. It’s not gender neutral or gender bending or gender free or any of the other expressions we’ve been using to describe the current clothes-fluid moment, because it is, in fact, entirely gendered, at least going by traditional definitions of men’s versus women’s clothing. The clothes and their conceptual allegiance have not changed at all. The person wearing them has.”

To hear it from Friedman and Ghesquiere, fluid sexual identity attitudes are an emerging avant-garde thing that echo the attitudes of free-thinking persons everywhere and, like any nascent progressive cultural movement, will eventually be absorbed and to a certain extent adopted within mainstream society. I’m fairly liberal to a degree, I want everyone to be free, and Louis Vuitton clothes are cool as far as they go. But in my view Jaden Smith is a precious little rich-boy weenie — a coddled kid who doesn’t know where the fuck to turn so why not take a shot at a little fashionable cross-dressing?

I don’t know if I’m allowed to say this or not, but a July 2014 study by the Centers for Disease Control and Prevention reported that “less than 3 percent of the U.S. population identify themselves as gay, lesbian or bisexual.” And an April 2011 study by the Williams Institute estimated that 3.8 percent of Americans identified as gay/lesbian, bisexual, or transgender.

Please don’t hate me, Twitter. I don’t want to sound like a clueless retrograde fuckface, but I’m presuming that Smith’s highly attuned fashion sense probably won’t be adopted outside of this particular realm anytime soon. Because of, you know, manifestoes and questions and all that other tedious middle-class stuff.

Note: “Max, he’s wearing a dress” is a quote from what film?

January 8, 2016by Jeffrey Wells16 Comments
« Previous post
NRA Loons Are Dug In, But They’ll Eventually Get Old and Die
Next post »
Zero Mostel In Heaven to Ted Sarandos