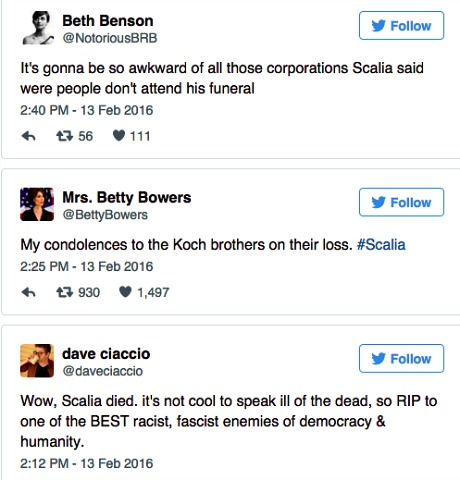 From a 4.28.15 New Yorker article by Jeffrey Toobin: “There was a shocking, ugly moment during the argument of Obergefell v. Hodges, the same-sex marriage case, in the Supreme Court on Tuesday. Right after Mary Bonauto, the lawyer challenging marriage bans in several states, completed her argument, a spectator rose from a back row and started screaming, ‘If you support gay marriage, you will burn in Hell!’ As the man yelled, ‘It’s an abomination!,’ guards carried him from the courtroom.

“That wasn’t the ugly part, though. In the quiet moment after the man was removed, as his shouts vanished into the hallway, Justice Antonin Scalia filled the silence with a quip. ‘It was rather refreshing, actually,’ he said.”

February 13, 2016by Jeffrey Wells110 Comments
« Previous post
“If The Extremely Divisive Revenant Wins Best Picture, We Have to Throw Out All The Stats” — Sasha Stone
Next post »
People Actually Paid Money To See Marooned