One Flaw In An Otherwise Gripping, Scalpel-Sharp Miniseries

I complained about the Gooding casting on 12.9.14, to wit: “The midsized Gooding (around 5′ 10″) played a football player in Jerry Maguire, of course, but he doesn’t have that agile, broad-shouldered, brawny big-guy quality that Simpson (who stands around 6′ 2″) had in his prime. Plus you need a square-jawed, Fred Williamson– or Robert Hooks-resembling actor who can deliver that cool, studly, possibly malicious vibe…a guy who just might have an Othello complex going on inside. Gooding doesn’t have the vibe at all. He’s about charm, smiles and occasional glares, but he’s not a rage-aholic.”

And that was before I’d seen anything, of course. Now that I’ve watched 60% of the series I’m even more dug in.

Cuba is too small. He looks older than OJ did at the time. OJ had relatively trim, clean features while Cuba looks weathered, saggy, baggy-eyed. Cuba has the wrong nose — OJ’s nose was straight, almost Romanesque. Cuba is whiny and raspy-voiced, his shoulders are too narrow and small, he’s too short and too wimpy. I appreciate that Cuba is giving it hell, but OJ had a strong, deep, resonant voice. He had largeness, presence, force. He was a formidable football guy. Cuba looks like his assistant, his trainer.

Why did Murphy do such a great job of casting everyone else, and totally get it wrong in the casting of OJ Simpson? 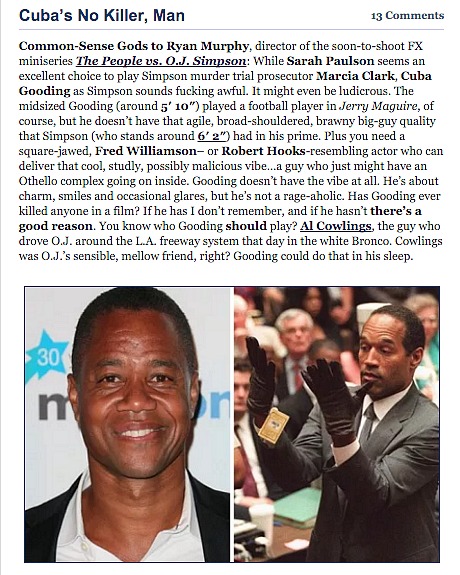