Thank You, Low-Information Black & Hispanic Voters, For Quashing The Dream of Profound Change & Ensuring The Return Of A Corporate-Supported, Center-Right Democratic Dynasty

“Before sitting down to interview Bernie Sanders [last October], Bill Maher polled his studio audience to see how many of them supported Sanders and how many preferred Hillary Clinton. Not surprisingly, Maher’s progressive audience members were feeling the Bern. Far more of them cheered when asked if they were backing Sanders than when asked if they were supporting Clinton.

“’But if Bernie doesn’t get the nomination, who will stay home and not vote for Hillary?’ Maher asked. Only one person clapped faintly.

“See? Exactly,” Maher exclaimed. “We have two good candidates. It’s like on the airlines: Sometimes you don’t get the fish, you have the chicken. ‘I’ll eat the chicken if I have to!’” — from a 10.17.15 HuffPost riff by Daniel Marans. 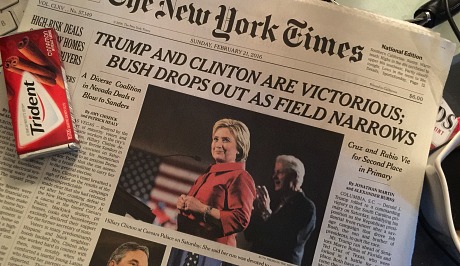 February 21, 2016by Jeffrey Wells48 Comments
« Previous post
Guilty But At The Same Time Not So Bad
Next post »
Biggest Misstep of Gus Van Sant’s Career — Stopped McConnaissance In Its Tracks