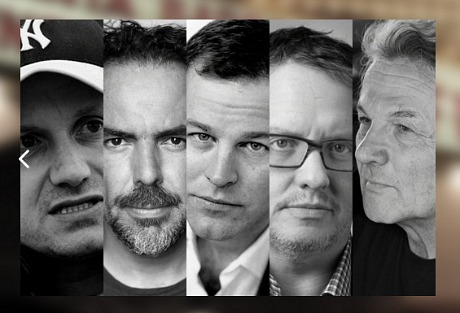 The Big Question is whether or not Feinberg will subject the audience to a 2 & 1/2 hour ordeal like he did last year (described in a 2.5.15 HE piece called “Existential Ordeal, Man”), or whether he’ll keep it to a more reasonable 100 minutes. I realize that the temptation is to go longer. I realize that last weekend’s DGA theatre event (same deal, same directors minus Abrahamson with the addition of Ridley Scott) lasted for 2 hours and 40 minutes. But I’m begging Feinberg anyway. End it before people start coughing and taking bathroom breaks. Please.

Last Saturday’s DGA moderator was director Jeremy Kagan. While watching the interview I flashed back to a Manhattan interview I did with Kagan some 33 or 34 years ago.

Kagan had scored in ’78 with The Big Fix but three years later came The Chosen, a period drama about Brooklyn Hasidic Jews with Robby Benson, Maximillian Schell and Rod Steiger. I was the managing editor of The Film Journal back then. A Kagan lunch interview was pitched by Rogers & Cowan, and I remember saying “look, I hated the movie and I’m probably not the only one, but if you want I’ll do the Kagan interview and make it a good one, but I won’t publish anything. I’ll just do it as a favor, and for the free lunch.” A day or two later the R&C publicist said “fine, okay…just keep the terms on the downlow.”

I met Kagan at a really swanky restaurant in the east ’40s. We had a very spirited discussion and enjoyed the hell out of the food. At one point we were talking about the grub and Kagan, I recall, raised his wine glass and said, “Thank you, Rogers & Cowan!”