As previously noted, Gavin Hood‘s Eye in The Sky (Bleecker Street, 3.11 NY & LA, 4.1 wide) was well reviewed at last September’s Toronto film Festival — 94% on Rotten Tomatoes, 70% on Metacritic. But the trailer suggested that this high-tech thriller, a study of the strategic tensions and moral determinations behind a lethal drone attack upon African terrorists, might be on the flat and simplistic side.

Or at least it seemed that way to me. Plus the trailer indicated too many CUs and MCUs of military and government types staring at video screens, I felt. Worst of all I wasn’t looking forward to another oppressively sincere performance by HE nemesis Aaron Paul. 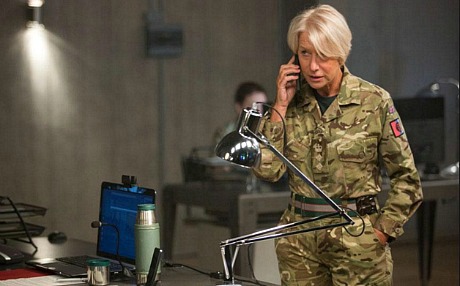 Well, the trailer misled. Eye in the Sky is anything but pat or simplistic. It’s a gripping, disciplined, morally complex nail-biter — smart and focused and tight as a drum. It’s well augmented by a concise, well-written screenplay (the author is Guy Hibbert), and by direction and editing that gets right down to business and doesn’t fool around. The whole thing held me start to finish. The intrigue and tension levels never ebb.

Best of all it ends with a suspense sequence that Alfred Hitchcock himself would give a standing ovation to. He’d actually forget about the nearby tray of gourmet delicacies, I mean, and get out of his cushy easy chair and stand up and applaud.

Plus it delivers dead-on performances from almost everyone in the cast but particularly from Helen Mirren as a military intelligence officer who spends most of the film requesting an official okay to kill a team of suicide bombers with a drone strike, and from Alan Rickman as a British General who tries to persuade several anxious British politicians to stop equivocating and give the order already. Jeremy Northam, Iain Glen and Monica Dolan portray three of those equivocators with skill and conviction. And Barkhad Abdi (Captain Phillips) is highly engaging as a sympathetic field agent who operates a flying bug-cam that delivers video of the terrorists as things progress.

The ethical crux boils down to which is preferable or worse — sparing the life of a little girl who happens to be near a small home where terrorists are preparing a suicide mission by not firing a drone missile at the target, or not sparing her life by blasting the terrorists, who may kill dozens of innocents if their suicide plot isn’t stopped, to smithereens before they leave the abode.

The only weak link in the entire thing is fucking Aaron Paul. He grotesquely overacts as Steve Watts, an American drone pilot in charge of actually firing the missile and possibly icing the little girl.  Watts has an attack of the guilts as the order is given and so naturally his eyes start watering and his voice starts to quiver, etc. He does everything short of outright weeping. His co-pilot, played by Pheobe Fox, does her share of over-emoting also.

One, guys like Watts deserve to be removed from their position and court-martialed for near-dereliction of duty. And two, Paul needs to somehow learn that less emotional acting — holding it in, indicating rather than showing — is far more effective than just turning on the spigots. Any dipstick actor can do that, and that, make no mistake, is what Paul is — a highly annoying “actor.” What a pain in the ass he is. Paul didn’t get on HE’s shit list and re-christened as Tennisball-head for nothing — he’s always doing something that bothers me. 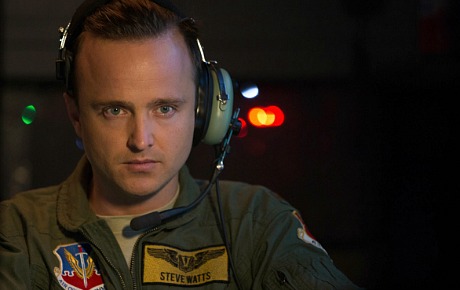 Eye in the Sky is not just a very good film — its also celebrates the return of Hood to the ranks of full respectability. Hood has been floundering for over a decade after scoring brilliantly with Tsotsi, a fast, urgent drama about a Johannesburg street thug (Presley Chweneyagae) who accidentally adopts a child. Tsotsi won the 2006 Academy Award for Best Foreign Language Film, and in the wake of that Hood seemed destined for bigger and better things.

Instead Hood made a dreary spy film (2007’s Rendition) and then two big-budget action-fantasy flicks (X-Men: Origins: Wolverine and Ender’s Game, respectively released in ’09 and ’13). Nobody much cared about these and poor Hood seemed to fall off the map. Having met and interviewed him in ’05 after catching Tsotsi at the Toronto Film Festival, I felt badly that he’d agreed to perform as a kind of cog in the corporate entertainment machine instead of at least trying to occasionally direct another film as good as Tsotsi.

Well, now he finally has. Eye in the Sky is a serious comeback and a big hooray for that.

If only Hood had hired a more interesting actor to play Aaron Paul’s trigger man, Eye in the Sky would be a perfect 10. It’s interesting that Hood himself plays a small but memorable role, as Paul and Fox’s Nevada-based commanding officer. Actually all of Eye in the Sky was shot in South Africa.

“Based on a book by South African playwright Athol Fugard and set in a funky Johannesburg shantytown, Tsotsi (pronounced ‘Sawt-see’) is about a merciless teenage thug (Presley Chweneyagae) who discovers a small spring of compassion in himself when he starts to care for an infant boy he discovers in the back seat of a car he’s stolen.

“Tsotsi‘s basic achievement is that it sells the notion in a believably non-sappy way that sparks of kindness exist in even the worst of us.

Tsotsi may sound sentimental and manipulative, but it’s not. But neither is it sadistic or repellent in some flashy, gun-fetish way. It has a raw authenticity, but not in any kind of derivative City of God way, which speaks well for its director, Gavin Hood. 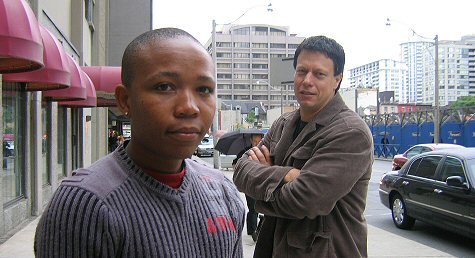 “The film proves once again that suppressed emotions…the feelings that a blocked-up person would rather not feel but which won’t leave him alone…are always a stronger, more poignant proposition than a film delaing with feelings fully expressed.

“Hood told me in Toronto that he’s always been ‘terrified’ of sentimentality and ‘being mushy’ in movies, and says that his mantra during shooting was that “there’s always got to be more going on within a character than what he lets out.”

“He said he wanted to use formal compositions and a slower editing style than the one popularized by City of God ‘because I didn’t want to seem like I was saying ‘me too’…I didn’t want to come in second.’

“Hood says he feels more of an affinity with the shooting style of director Walter Salles (The Motorcycle Diaries) and particularly Sales’ Central Station.

I had a sit-down with Hood on Tuesday, 2.21.06 at the Four Seasons hotel in Beverly Hills. Here’s a recording of most of it. 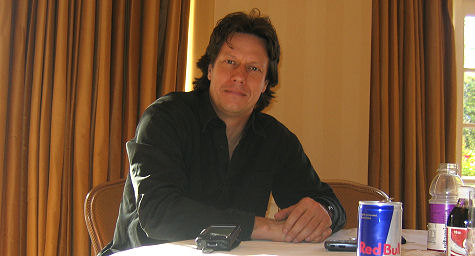