I’ll be happy to be proved wrong, but I’ve predicted time and again that Timur Bekmambetov‘s Christian-pandering Ben-Hur (Paramount, 8.12) will be a low-rent, CG-fortified blunt instrument — a Ben-Hur for fans of Abraham Lincoln, Vampire Hunter. But let’s be fair about this. The oar-slave and sea-battle sequences might be flagrantly CG-ish, but at least they’re more persuasive than the fake models-and-water tank footage used in William Wyler‘s 1959 classic of the same name. 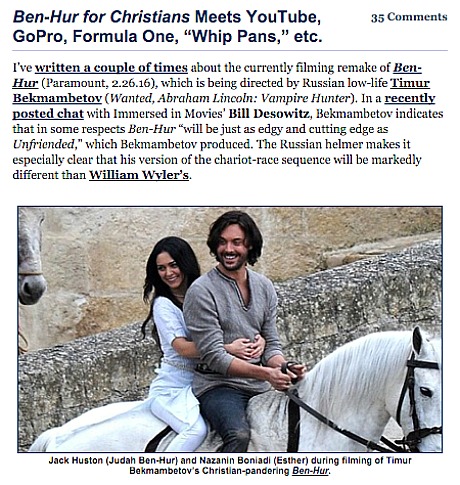 You can sense that Jack Huston‘s performance as Judah Ben-Hur is going to be respectably sturdy; the trailer also suggests that Toby Kebbell‘s Messala will be a kind of moustache-twirling Snidely Whiplash thing — he seems to lack the studly gravitas that Stephen Boyd brought to the role in ’59. And they’ve got Morgan Freeman playing Sheik Ilderim, the role that Hugh Griffith played (and won an Oscar for) in the ’59 film. London is Falling, Evan Almighty, this…is there anything Freeman won’t do for a buck?

The new version, co-written by Keith R. Clarke and John Ridley, apparently adheres to the basic story bones of Lew Wallace’s 1880 novel, but — be warned! — it appears to have eliminated Quintus Arias, the Roman general played by Jack Hawkins — at least as far as the sea-battle scenes are concerned.

The chariot-race sequence looks okay if a bit too frenzied and exaggerated. Nothing and I mean nothing can top Wyler’s organic version — a few matte paintings and some crowd simulations but otherwise 100% genuine all the way — real horses, real chariots, real dust and sweat. The newbie is produced by rightwing Christian entrepeneurs Mark Burnett and Roma Downey (The Bible miniseries, Son of God) along with Sean Daniel, Duncan Henderson and Joni Levin.

The Ben-Hur chariot race sequence as depicted in the 2016 version — pale yellow and dusty as all get out. 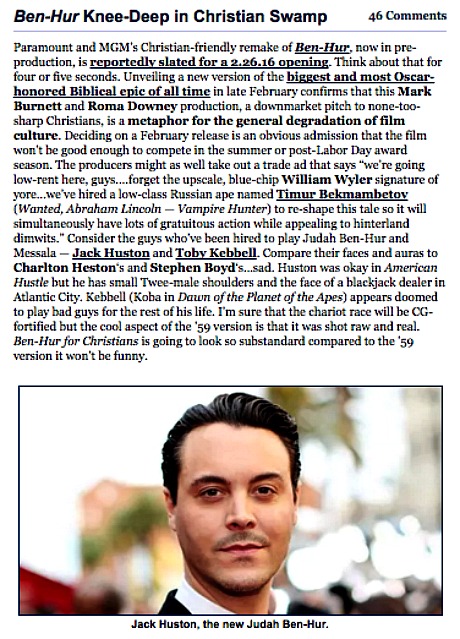 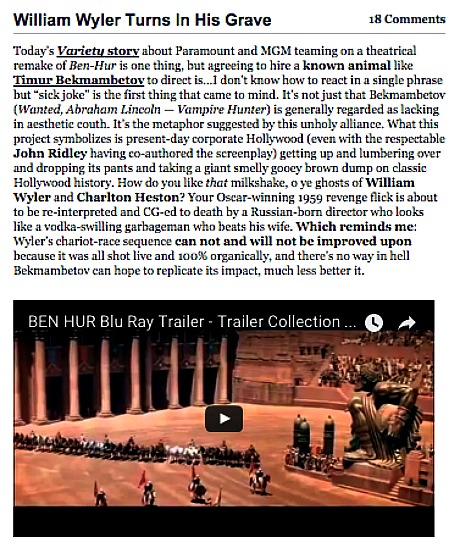 From a 4.25.14 post: “The idea of selling Ben-Hur to ‘faith-driven consumers’ is just as phony a sales pitch as the one used when the original Ben-Hur author, General Lew Wallace, called his book “A Tale of the Christ.” As screenwriter Gore Vidal explained in a ‘Making of’ documentary about the 1959 version, Ben-Hur is the story of unrequited love, betrayal and revenge between a Jewish boy and a Roman boy. Rage and bitterness are washed clean at the finale by Christ’s blood trickling into a stream, fine…but Ben-Hur never would have never been made into a film if the character of Judah Ben-Hur had followed the Nazarene’s teachings.

“If Judah (Charlton Heston) had returned from Jack Hawkins’ villa in Rome and decided to turn the other cheek and forgive Messala (Stephen Boyd) after learning that his boyhood friend had condemned his mother and sister to prison and the scourge of leprosy (instead of doing what he does in the film, which is to challenge and then defeat Messala in the chariot race, which results in Messala being trampled to death by horses), Ben-Hur never would have gotten the go-ahead.

“So don’t give me any of this religious thematic crap. Ben-Hur is, was and always will be about having your cake (i.e., sweet revenge) and eating it too (i.e., being re-born at the finale).” 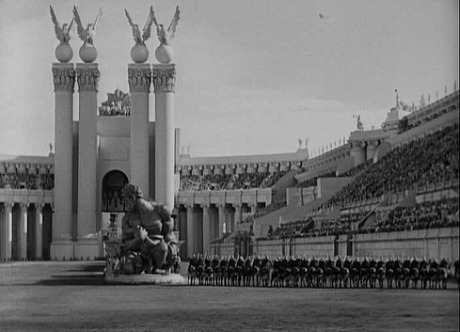 Shooting of chariot race for 1926 version.