No Ducking Out Now — Cups Is Upon Us

Yesterday Terrence Malick‘s Knight of Cups opened in at least four locations. A portion of the readership caught it yesterday, I assume. Please share reactions. I posted a half-mystified, half-apoplectic response during the Santa Barbara Film Festival. And then the German Bluray arrived and I watched part of it again. But I made the mistake of waiting until 11 pm so I’m afraid it put me to sleep. I’ll give it another go tomorrow. Emmanuel Lubezki‘s cinematography delivers the usual but God, the nothingness, the floundering around, the atmospheric plotzing. 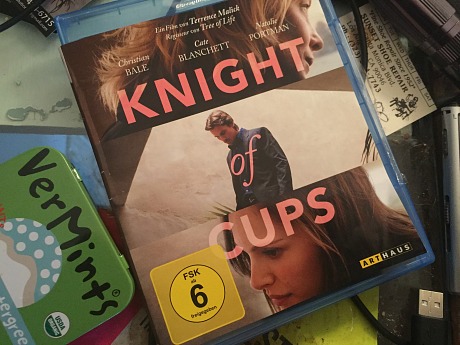 The last line of my 2.8.16 review stated that Knight of Cups “is a kind of ISIS recruitment film.” This was a cousin of an idea I posted posted eight years ago about the first Sex and the City film being a Taliban recruitment thing.

If you were looking to persuade angry, disenfranchised youths that America is the cradle of Satan, you would only have to show them Knight of Cups. It makes the case. Christian Bale wanders around from one affluent Los Angeles location to another…doing nothing, feeling nothing, gazing at people and places, apparently wanting nothing. Nothing whatsoever percolating in his soul. This is a man who has discovered the beautiful and repulsive meaningless of things when you have a fair amount of money in your bank account and Chivo is following you around and Terrence Malick is whispering in your ear, “This is good, Christian…let’s do it again but this time with less feeling.”

Hell, Knight of Cups made me think about joining ISIS…kidding. But it did make me think about…whatever, popping a Percocet or something. It’s a brilliant zone-out film. You sit there and sit there and eventually your eyelids begin to droop a bit, and then a bit more. As I sat in my seat I really did wonder what effect this tidepool of ennui and eternal drifting might have upon an angry someone who’s leaning toward a philosophy of moral decisiveness or absolutism. I swear to God this movie is fuel for that kind of thing.

Review excerpts: “Knight of Cups is To The Wonder Goes To Southern California with a lot more dough and a greater variety of hot women. They could re-title it Terrence Malick’s Wide, Wide World of Delectable, Half-Dressed, Model-Thin Fuck Bunnies.

“They could also retitle it Terrence Malick’s Beaches…boy, does he love going to the beach at magic hour and sloshing barefoot through the tides! This meandering dream-doze movie is all beaches, all deserts, all swanky condos and office towers and absurdly arrogant McMansions. And all half-captured moods and fall-away moments and conversational snippets.

“Who am I? Why am I so damn lazy? Can I do anything besides wander around and gaze at stuff? Either Bale is on Percocets or I need to drop a Percocet the next time I watch this.

“The most attention-getting thing that happens in Knight of Cups is a semi-serious earthquake (lasts around ten seconds, feels like a 7 or 7.5). The second is a home robbery by a couple of shaved-head Latinos. The third is a nude blonde standing on an outdoor balcony (possibly Bale’s). The rest is spiritual ether and vapor and kicking sand.

“I was sitting in my Arlington seat and saying to Bale ‘you aren’t worth my time, man …you’ve got lots of money and opportunity and apparently some degree of talent, and all you can do is wander around and fuck beautiful women and feel kind of depressed about it. Asshole!’

“40 years ago I was convinced Malick had seen the burning bush and was passing along God’s-eye visions, and now look at him.”