At long last, Kino’s Bluray of Richard Fleischer‘s The Vikings (which I pre-ordered some weeks ago) arrives on Tuesday, 3.8. Odin! Shot in Technirama, the same large-format process used to shoot Spartacus, this eye-filling cheeseball epic is sure to look exceptional in high-def.   Not a restoration but certainly an improvement over the old DVD. Brian Orndorf’s Bluray.com review: “Bringing breathtaking vistas to HD, The Vikings Bluray preserves the bigness of the effort. The image (2.35:1 aspect ratio) presentation is generally detailed to satisfaction…a crisp viewing experience that pushes to the natural limits of the original cinematography. Delineation isn’t a problem, handling evening sequences with care. Scenes with mist and fog hit a few pockets of noise. The source remains free of major damage, offering only mild patches of speckling.” 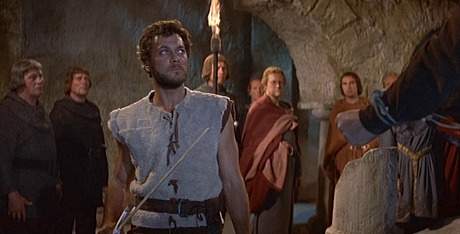 “For me, Fleischer’s peak was The Vikings — the 1958 historical action epic that was mostly dominated by producer-star Kirk Douglas, but was notable for two dramatic elements that still work today.

“One is what seems to happen inside the brawny Viking characters (particularly Kirk Douglas and Ernest Borgnine‘s) whenever Odin, the Nordic God, is mentioned. We hear a haunting, siren-like theme on the soundtrack, and these rough blustery types suddenly stop their loutish behavior and retreat into a childlike emotional place…a place that’s all about awe and fear. This happens maybe three times in this big, unsophisticated popcorn movie (which nonetheless feels far sturdier and more classically composed than a typical big-budget popcorn actioner made today), and each time it does The Vikings has a spirit.

“The other thing that still works is the film’s refusal to make much of the fact that Douglas and costar Tony Curtis, mortal enemies throughout the film, are in fact brothers, having both been half-sired by Borgnine. Costar Janet Leigh begs Douglas to consider this at the finale, and Douglas brushes her off. But when his sword is raised above a defenseless Curtis at the very end and he’s about to strike, Douglas hesitates. And we know why. And then Curtis stabs Douglas in the stomach with a shard of a broken sword, and Douglas is finished.

“The way Douglas leans back, screams ‘Odin!’ and then rolls over dead is pretty hammy” — okay, call it funny — “but that earlier moment of hesitation is spellbinding — one of the most touching pieces of acting Douglas has ever delivered. Douglas wasn’t very respectful of Fleischer’s authority during the making of The Vikings, and for all I know Fleischer didn’t have that much to do with this final scene…but he probably did, and he deserves our respect for it.”

March 5, 2016by Jeffrey Wells15 Comments
« Previous post
Respect For Louis C.K., But There Goes A Portion of His Audience
Next post »
Fellowship