Yesterday a former film critic who for some left-field reason has requested anonymity posted the following on Facebook: “Just want to remind everyone: If you ever run into an actor, writer, singer or whatever [whom] you don’t know and ask for a picture with them, you’re being, no matter how well-intentioned, a horrible person who turns strangers into props for the sad validation of their grim insecurity. And if you ‘have to do it for work,’ quit that job.” 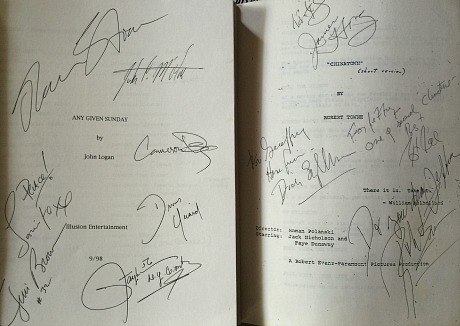 Autographed scripts of John Logan’s Any Given Sunday and Robert Towne’s Chinatown. I got everyone to sign the Logan script during an Any Given Sunday junket in ’98, and the Towne script at a 20th anniversary Chinatown gathering at LACMA in ’94.

I’ve never asked any celebrity for a selfie in my life, and I never will. And I’ve only asked for autographs twice, and that was to sign screenplays at an invitational event. Autographs are much more intimate than selfies. A signature is so personal and expressive while a selfie smile is just a mask.

I have to admit that when I got out the Any Given Sunday screenplay this morning and saw that I’d gotten Cameron Diaz‘s signature, I smiled. It felt good. But selfies are grotesque.

My Facebook response to initial post: “Truer words have rarely been spoken, but between 98.5% and 99% of the public will never listen or give a damn. Because if they DON’T get that sad validation of their grim insecurity, that’ll be one less thing they DON’T have in their lives, and that’s on top of the fact that so many people self-define their lives in terms of what isn’t possible, isn’t affordable, isn’t happening, isn’t owned, can’t be achieved, is longed for but out of reach, can’t be imagined, etc.

“So they HAVE to get that shot, that selfie, that celebrity moment. Because it helps for a minute or two. And then hours or days or weeks later they can look at the photo on their phones and smile and say, ‘Well, THAT happened!'”

Correction: The above-referenced film critic didn’t technically request anonymity, but he did ask me to delete his name and delete the tweet that contained his name because I didn’t write and ask him for permission to quote a Facebook post that he’d written. A Facebook post is public, no? An email, private. A conversation, private. Something you might mutter inside a toilet stall, private. But when you post something on Facebook or Twitter, it’s public. Am I missing something?