The Disney guys offered several invitations to catch Byron Howard and Rich Moore‘s Zootopia. I read and understood their emails, of course, but emotionally and psychologically I rejected the idea so fast I didn’t even see the puff of smoke. I don’t care how “mildly progressive” Zootopia‘s political message is — I will not submit to this thing. Yes, I sat through Inside Out at last May’s Cannes Film Festival and intellectually appreciated its values, but it was hellish all the same. Yes, it’s a bright and insightful woman’s film and a landmark head-trip movie, but I hate, hate, HATE that peppy energy. It’s like snorting bad cocaine. 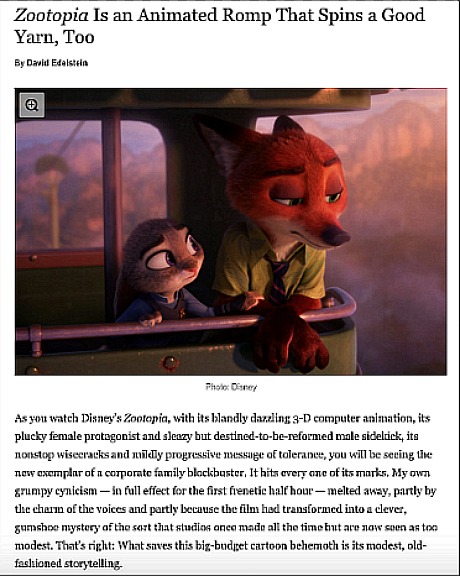 On a certain level I believe that family-friendly corporate animation is almost demonic in that it has a subversive agenda. It delivers family narcotic highs when your kids are young, but it acts as a kind of childhood sedative that leads to placated thinking and zombie lifestyles. Corporate animation is mainly about injecting and reenforcing blandly positive, middle-class consumerist attitudes and values. Watch corporate animation as a kid, live your tweener and teenaged life in malls, sign a college loan that will keep you in a kind of jail for half your life, and eternally invest and submit to American McMansionism — an Orwellian system if there ever was one.

Childhood was a huge gulag existence when I was a kid, and Disney mythology was a key aspect of that. Comforting but phony emotion dreams do you no good as a 7 year-old — you’ll just have to unlearn them when you get older. And my parents played right along. Everything they did and said to shelter me from things they felt I was too young for constituted a huge minus in the end. It took me years to unlearn the lessons and impressions they passed along in the name of parental compassion. I was living in a fog until I was saved by the awareness of great and sublime things…by hitchhiking, the collected works of Ernest Hemingway, the short essays of Robert Benchley, the Beatles, Eastern mysticism, the Rolling Stones, psychedelic substances, William S. Burroughs, playing drums, beautiful women, glorious sunsets, etc.