Up To The Challenge, Adapt Or Die, etc.

The trouble began within seconds of my Seoul-to-Hanoi flight landing at 11:15 this morning. AT&T’s default partner Viettel, which is Vietnam’s largest mobile operator, wasn’t allowing me to (a) text, (b) use Skype or (c) use Google Maps. I had no such difficulties when I was here in 2012 and ’13. Puzzling. I asked around after checking in at the Art Trendy hotel in Hanoi’s Old Quarter, and I gradually learned that Viettel can’t shake hands with the iPhone 6 4G technology. (Or something like that.) 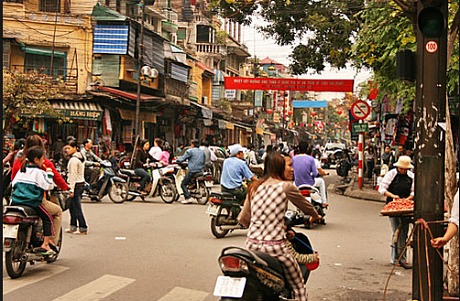 I’m afraid this is one of those times in which I couldn’t post an original HE image. Rest assured this is almost exactly what it looks like outside my hotel window. I was too consumed with cell-phone hassles to snap my own stuff.

This could’ve been a huge problem. The plan from the start has been to get around on our own (myself, Jett and Cait) without a guide, but for that we obviously need to access Google Maps. So I had to buy a Vietnamese SIM card, and now everything works. I’ll keep it in the phone until we head south on Monday morning.

The Hanoi atmosphere was all milky and foggy as I flew in. It’s now 6:05 pm on Friday (4:05 am in Los Angeles) with the smell of scooter exhaust and street grime mixed with the aroma of spicy hot noodles with steamed chicken and fish. The Old Quarter is no one’s idea of antiseptic but that’s part of the charm. It takes character to appreciate such a neighborhood. (No Club Med luxury queens.) My fifth-floor hotel room is small but acceptable. Dusk is just starting to settle in. I have a list of several Hanoi street food joints that we’ll be hitting tomorrow and Sunday. We’ll be dining at Club Ly on Sunday evening. 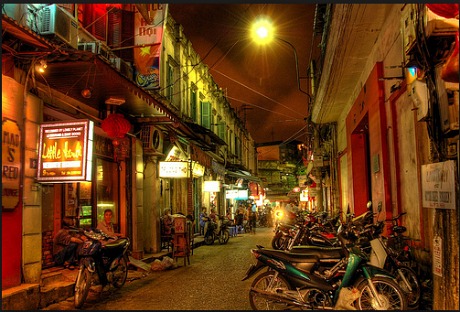 March 18, 2016by Jeffrey Wells16 Comments
« Previous post
Red Pencil
Next post »
Keep Milking The Material Until Even The Most Devoted Fans Tire Of It