Since the beginning of 2010, or the start of the 21st Century’s second decade, roughly 54 films that are really, really good have opened commercially. Add to these HE’s best of the first decade, which number 42, and you have 96 films since the dawn of this century. If you haven’t seen all of these you need to seriously recalculate and make an effort to do so:

Best of 2016 (So Far): Manchester By The Sea, A Bigger Splash, The Witch, Eye in the Sky, The Confirmation, The Invitation. (6)

I’m not trying to be picky but Gen. Robert E. Lee and President Abraham Lincoln are too young and pretty here. A more realistic, harder-core version of this skit would have used middle-aged, 50something actors with creased faces to play the Civil War-era leaders.

About a month ago Warner Bros. announced that Ben Affleck‘s Live By Night, a 1930s gangster drama based on a Dennis Lahane novel, would open on 10.20.17, or roughly two years after it began shooting. (Sasha Stone and I visited the set during last October’s Savannah Film Festival.) I figured they might need a little time for extra shooting or whatever, and that they needed to accommodate Affleck’s super-busy schedule. So it seems odd that they’re having a research screening on Tuesday, 4.26, in Pasadena. Odd that it’s showable already (Affleck wrapped principal last February) and a little odd that they’re test-screening a film not slated to open for another 18 months. But whatever. 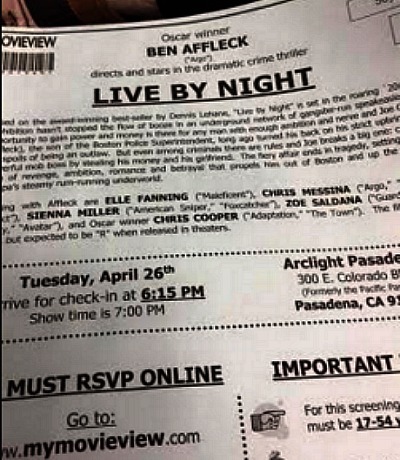 Yesterday afternoon I visited a Coffee Bean & Tea Leaf at the corner of Beverly Blvd. and Robertson Blvd. and ordered my usual no-frills black coffee. I sat two tables away from a couple of 20something women — Gabourey Sidibe‘s sister and a tallish brunette thoroughbred — who weren’t chatting as much as aggressively networking each other like crazy. They were trying to out-intensify each other. Everything they said had to be astonishing or funny or outrageous or an OMG. They were, like, so getting off on each other’s wit and energy.

After a while I started getting a fucking headache. I tried not listening, believe me, but it found it exhausting to even attempt this.

If I’d been rude enough I would’ve walked over and said to them, “Excuse me, guys….I know this is none of my business so please forgive me in advance, but did you know that sometimes you can just say this or that to each other without, you know, the intent or expectation of your words being anything special? You don’t have to be funny or outrageous or OMG…you can just settle into your souls and say what you really think, and it’s okay if it’s slightly boring or whatever. You can turn it down and it’ll all be good….I promise.

Yesterday afternoon Indiewire‘s Anne Thompson posted some Oscar-nomination spitball calls. I’m afraid I need to clear the air about some of her Best Picture picks. I’ll just go down the list title by title:

Thompson Frontrunner #1: Nate Parker‘s The Birth of a Nation (Fox Searchlight). HE comment: It’s a frontrunner, yes, but it probably won’t last over the long run, especially if Denzel Washington‘s Fences turns out to be aces. Any and all films with African-American subjects and/or made by African-Americans are in a very favorable position this year with many Academy members anxious to prove they’re not OscarSoWhiteys, but here’s a fact: The Birth of a Nation is an Ed Zwick film.

Robert Zemeckis‘ Allied (Paramount) / HE comment: WWII romance between assassins, or something like that. Maybe but if you ask me Zemeckis’ instincts these days are too schmaltzy. He was a provocateur in the late ’70s, and a somewhat edgy guy when he made Cast Away. But Polar Express and The Walk convinced me that he’s become kind of a smoothie who smoothes things over.

Woody Allen‘s Cafe Society (Amazon, Lionsgate) / HE comment: Two days ago I would’ve said Woody’s in a decline mode and that he generally doesn’t do Oscar films anyway, but that trailer is encouraging. Still, you have to wonder why Thierry Fremaux gave it the opening-night slot for next month’s Cannes Film Festival.

Gary Ross‘s The Free State of Jones (STX) / HE comment: Nope. Ross doesn’t make Oscar-level films, period. The McConannaissance is on a downturn.

Derek Cianfrance‘s The Light Between Oceans (DreamWorks/Disney) / HE comment: Nope.

Morten Tyldum‘s Passengers (Sony) / HE comment: Nominations for VFX and production designed all but assured. Ethical issue will interfere with Best Picture talk — mark my words.

A couple of days ago I read a close-to-final draft of Jon Spaihts‘ Passengers, a sci-fi drama which has been directed by Morten Tyldum (The Imitation Game) with Chris Pratt and Jennifer Lawrence in the lead roles. Sony/Columbia will release it on 12.21.16. The presumption in some quarters (certainly on Anne Thompson’s part) is that it’ll qualify as an awards-level thing. And maybe it will.

Here’s the Wiki synopsis: “A spaceship, Starship Avalon, on its 120-year voyage to a distant colony planet known as the Homestead Colony and transporting 5,259 people, has a malfunction in two of its sleep chambers. As a result, two hibernation pods open prematurely and the two people that awoke are stranded on the spaceship, still 90 years from their destination.”

Yesterday that pithy Woody Allen line from Cafe Society — “Life is a comedy written by a sadistic comedy writer” — was ricocheting all over the blogosphere and twitterverse. It hit particularly close to home with me because it alluded to what I believe is the central sickening irony in romantic relationships, which is that the only way to last with someone is to not be 100%, head-over-heels, cunnilingus-two-or-three-times-per-day in love with them.

If you’re happily, contentedly, earnestly in love as far as it goes — if you’re settled, semi-complacent and comfortable with an attractive lady of good character but not down on your knees in love with her, things might work out.

You can’t be crazy in love — you have to be confidently, peacefully, sincerely, half-solemnly and moderately in love. Then and only then can things work out…maybe.

Posted on 10.28.13 after a breakup: “One of life’s darker ironies is that the relationships that I know could last forever are always the ones that I can walk away from without too much concern because I’m less smitten than she is.

The first third of 2016 concludes next weekend, and for me the absolute finest of the last four months are the following six films, two of which are HE “cheats” that haven’t actually opened during this period:

(1) Kenneth Lonergan‘s Manchester By The Sea, which is cheat #1 because it won’t open until next November, but it totally blew me away when I caught it at last January’s Sundance Film Festival; (2) Luca Guadagnino‘s A Bigger Splash, which is cheat #2 as it doesn’t open until early May but I don’t care; (3) Robert Eggers‘ The Witch; (4) Gavin Hood‘s Eye in the Sky; (5) Karyn Kusama‘s The Invitation, and (6) Bob Nelson‘s The Confirmation.

Approvable with Reservations: Richard Linklater‘s Everybody Wants Some charts its own course and gets a lot of things right, but it begins to feel claustrophobic, even suffocating at times due to relentless jock-mentality air particles. Absurdly overpraised by Linklater fanboys during South by Southwest; reviews were a bit too kind when it opened.

Pleased At First But Whipped, Wheezing By 100-Minute Mark: Captain America: Civil War is brilliant and well-jiggered but it wears you down, man…270 to 275 punches thrown….needed a Red Bull by the 100-minute mark…peaks with Berlin airport brawl…“completely overstuffed…shameless fan service bits…sure to satisfy the devotees.”

Asghar Farhadi‘s Salesman, apparently some kind of riff on Arthur Miller‘s Death of a Salesman, has been added to the 2016 Cannes Film Festival’s competition slate. Excellent news! Likelihood of HE attendance: 100%. Pic costars Shahab Hosseini and Taraneh Alidoosti, who were in Farhadi’s A Separation and About Elly.

On top of which David Mackenzie‘s Hell or High Water, a “western crime drama” costarring Chris Pine, Ben Foster and Jeff Bridges, has been added to Un Certain Regard. MacKenzie’s last was Starred Up, the mostly respected if somewhat problematic father-son prison drama. Likelihood of HE attendance: 75%.

Jean-François Richet‘s Blood Father, a Mel Gibson whoop-ass flick about a trailer-residing beardo with a criminal past trying to save his daughter from the clutches of a gang of psychopathic Latino criminal assholes, has been added to Cannes’ midnight slate. Likelihood of HE attendance: 25%, if that.