Last night around 7:30 pm I experienced something close to a spiritual revelation, except it arrived in purely visual terms. I’d bought a pair of Warby Parker prescription reading glasses two or three months ago, but they were too good in that regard as they made everything outside of whatever I was reading look blurry. So yesterday I bought a pair of tinted bifocals. Almost as an afterthought the guys at Lens Crafters had tested my long-distance vision, which I’d never had a problem with. Everything five or 100 feet or a block or two away had always looked clear enough, I thought. Then I put these babies on last night…heavens! Everything outside my immediate reading realm was suddenly razor sharp. It was like I was suddenly living in a Lucy in the Sky realm in which everything outside of my 18-inch sphere was crystal clear and focused with an Alexa 65 lens by Emmanuel Lubezski. In fact my distance vision had softened a bit over the years but I just hadn’t noticed it. Quite a change. 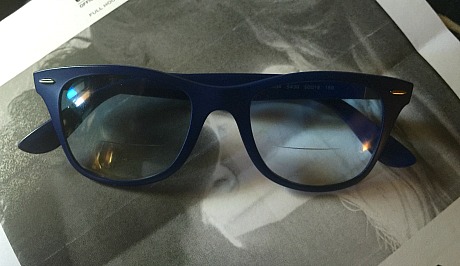 For the last 40 years posters for Woody Allen movies have mainly looked…well, fine but minimal. The idea, it always seemed, was to agree with or certainly not challenge the generally austere, less-is-more Allen aesthetic, which has most consistently manifested in the bare-bones, white-on-black style of his opening credit sequences. Simple, direct, tasteful…but never much in the way of flair or stylistic pizazz. This has all changed with the cool new poster for Allen’s Cafe Society (Amazon, 8.12.16). You have to assume this idea came from the advertising guys working for Amazon, the film’s distributor. I’m not saying previous Allen posters were dull or listless or lacking in merit, but none of them looked as sexy-cool as this newbie. Nothing, at least, is leaping out from my memory. 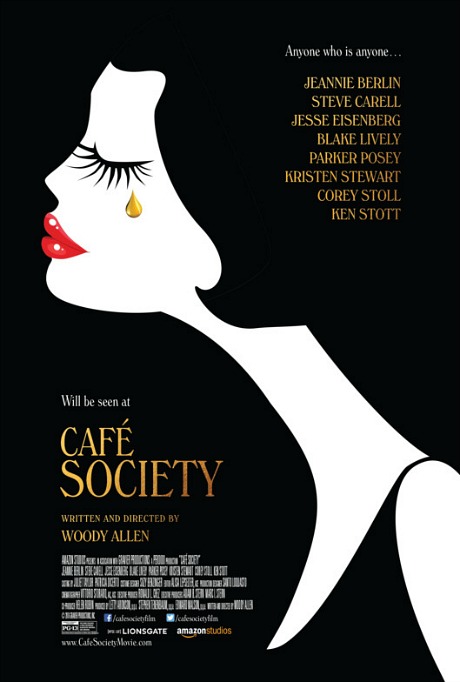 During last night’s Tribeca Film Festival q & a with John Oliver, Tom Hanks said flat-out what anyone will tell you but which stars like Hanks are often loath to admit. He said that he “peaked in the ’90s.” Gold star for candor.

Except I partially disagree. I would say that Hanks peaked from Splash (’84) to Road to Perdition (’02), or a run of 18 years. Okay, 14 years if you feel that Hanks’ career really took off with Big in ’88. And yes, I would say that since Perdition luck was not really been with him except in the case of Charlie Wilson’s War (’07) and Captain Phillips (’13).

Once your cards have gone cold, it’s awfully hard to heat them up again. There’s nothing more humiliating than for a man who once held mountains in the palm of his hands having to push his own cart around the supermarket as he buys his own groceries and then, insult to injury, has to wait in line at the checkout counter. Then again he’s stinking rich.

Hanks’ first big-time stinker — a movie I’ll hate with every fibre of my being for the rest of my life: The Green Mile (’99).

“Being a regular-ass white guy of English, French and Welsh heritage, something in me wants to push back against this shite. White-shaming has been going on since the late ’60s (the 1972 National Lampoon article ‘Our White Heritage’ was one of the first expressions of this self-loathing). I guess I’m feeling vaguely annoyed with this general attitude out there that there’s something vaguely wrong with being a white guy. I’m fairly liberal to a degree. I want everybody to be free. But I also reserve the right to be white, see white-people movies, eat white, put mayonnaise on sandwiches, dress white, party white, fuck white, talk white and indulge in everything else that flows from my natural whiteness if I fucking feel like it.” — from “The Whiteness, or Why The Old ‘Birds of a Feather’ Rationale Doesn’t Cut It Any More and Why Mixed-Culture Characters Are Better Than European Anglo-Germanic Types,” posted on 5.28.15.