First-hand recollection of shooting of The Shining by some electrician who came to know Stanley Kubrick and even played chess with him: “Some people were scared of Kubrick because he could make or break a career. But not Jack [Nicholson]. Jack called him Stan to wind him up. You could call him Stanley, Mr. Kubrick or Guv, just not Stan. But they liked each other. 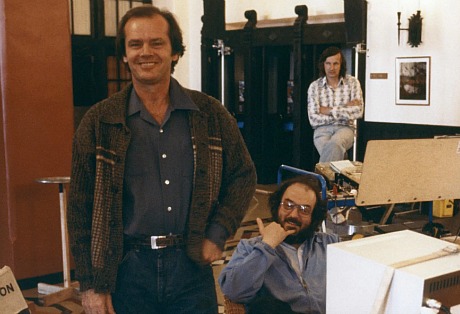 “One time Jack said he had done his back in and needed a few days off. That’s a lot of time when you’re shooting a big film, but Stanley said okay. The next day we were in the sparks room watching Wimbledon when Stanley walks in. He asks what we’re up to and as he turns to look at the telly, there he is: Jack Nicholson sat in the crowd with a girl on either side. Stanley went mad.”

From a 2007 post: One of my first big-star interviews was with Jack Nicholson. It happened in early ’82 on a brutally cold morning.  The 33rd floor of Manhattan’s Hotel Carlyle, sometime around 10:30 or 10:45 am.

When I first arrived I was greeted by publicist Bobby Zarem in the foyer. Nicholson was sitting down the hall and around the corner, but in earshot. “How are ya, Jeff?” Zarem asked. Manhattan had been going through a long frigid spell and I wasn’t wearing a warm-enough jacket that day to cope with 15 degree weather, so the first thing that came to mind was, “Cold as usual.” And a split second later I heard Nicholson doing an imitation of me, saying “cold as usual.”

The article was a freelance piece for the New York Post. It ran four or five days later. The topic was supposed to be Tony Richardson‘s The Border, in which Jack played a Texas border guard, but we wound up talking about this and that, and particularly about his then-current murderer image that stemmed from The Shining.

One of Nicholson’s lines in The Border was about wanting to “feed them ducks,” and Time‘s Richard Corliss had written in his review, “Feed them what? Strychnine?” 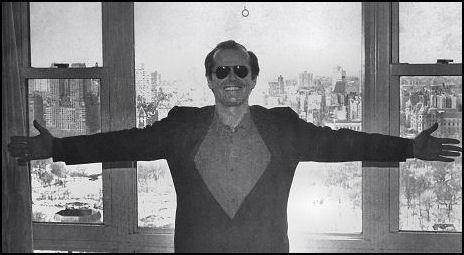 I mentioned that aspects of his Shining performance played to me like a kind of inside joke. Nicholson looked at me cockeyed. His response was basically who was I, a mere journalist, to assume I had an inside view of things? He wasn’t agitated — he was relaxed and grinning — but I remember him saying, “I’m inside.” And I fucking wasn’t. Check.

Like a lot of X-factor guys, Nicholson has a way of jumping the track in terms of conversational threads. We got to talking about cold-weather jackets and he mentioned he expected to head downtown later that day to buy himself a nice warm one. “What are you looking for?”, I asked, meaning what kind of jacket (goose down, motorcycle jacket). And Nicholson answered, “I don’t know. I haven’t known for quite some time.”

We talked for just under an hour. This was back in the days when they actually let you talk to celebrities for that long.

April 24, 2016by Jeffrey Wells21 Comments
« Previous post
How Indifferent Will Cannes Jury Be To What Everyone Else Thinks?
Next post »
Speaking As An Honorary Anguished Jew, I Relate To Smart Docs About Authentic Specimens