Warren Beatty‘s still-untitled Howard Hughes film, which will be released sometime later this year (November or December) by 20th Century Fox, is being research-screened on the evenings of Monday, 4.18 and Tuesday, 4.19 at the Pasadena Arclight. The interesting part is the Beatty-approved description of the film that’s included in the invite. 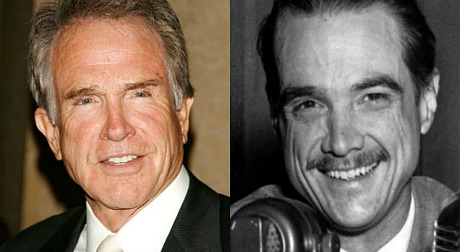 A little more than 13 months ago Beatty described the film to N.Y. Times reporter Michael Cieply as “somewhat light-hearted.” The invite for Monday’s showing calls it a “lighthearted romantic dramedy.” Here’s how most of the invite reads, but pay attention to the final paragraph:

“In 1958, Marla Mabrey (Collins) is a 22 year-old devout Baptist [and] beauty queen from Front Royal, Virginia, and an aspiring actress. She arrives in Hollywood only a few weeks after 22 year-old Frank Forbes (Ehrenreich), who is an ambitious young businessman and devout Methodist. Both of them long for success under their contracts with billionaire movie-maker, famed aviator, and notorious womanizer Howard Hughes (Beatty).

“Their instant attraction to one another is blocked not only by the strict rules laid down by Hughes that prohibit any romantic or sexual interaction between his actresses under contract and the men working for him, but is all the more off-limits because of the strict religious training and beliefs of Marla and Frank.

“These obstacles in the relationship between Marla and Frank are magnified and soon become ridiculous, outrageous and absurd when the emotionally unstable Hughes becomes involved.”

If you know the kind of silly absurdist comedy Beatty has leaned into from time to time (Vincent Gardenia and the “hats” interrogation in Heaven Can Wait, that Republican guy doing the “hi-yi-yah” Indian chant at that election-night gathering in Beverly Hills, the singing of “Little Darlin’ with Dustin Hoffman in Ishtar), you’ll recognize what the Hughes film is probably serving to some extent.

With the above-described behaviors brought into the narrative by the “emotionally unstable” Hughes, you have to consider Peter Biskind‘s observation about how Beatty has long regarded Hughes as a similar-type bird — a guy whose exacting, obsessive, privacy-obsessed lifestyle reflects Beatty’s, especially when you consider the fact they were both bigtime skirt-chasers.

April 16, 2016by Jeffrey Wells6 Comments
« Previous post
Left-Turn Machismo
Next post »
What Does This One-Sheet Tell You?