A couple of weeks ago Variety‘s Kris Tapley posted an intelligent opinion piece about Sean Parker and Prem Akkaraju‘s Screening Room, a start-up that would offer $50 living-room downloads of brand new films. Tapley’s view is basically that the theatrical experience has been taken over by the mongrels and that people of taste and refinement prefer to duck it as a result, and that it would probably make sense to offer Screening Room to this crowd rather than restricting them to standard multiplex degradations. 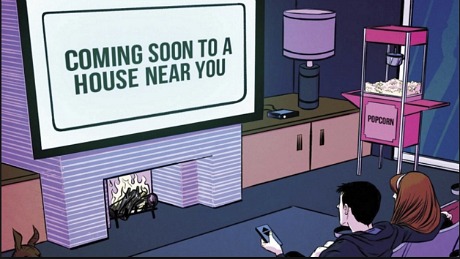 Gary Musgrave illustration that first appeared in a 3.15 Variety story about Screening Room.

Populist, reach-out filmmakers like Martin Scorsese, Steven Spielberg, J.J. Abrams, Peter Jackson and Ron Howard like the Screening Room concept while those who continue to cherish the notion of theatres as havens for Movie Catholic worship — Christopher Nolan, James Cameron, M. Night Shyamalan, Roland Emmerich — are against it. The issue is sure to be topic #1 during Cinemacon (4.11 thru 4.14), the annual Las Vegas exhibitor gathering that I for one will be ducking this year.

Most exhibitors believe in the revenues they’ve enjoyed in the past. Like most people they want the past to be present, the good times to continue. The past, of course, didn’t include revenue reducers or diverters like Screening Room. They will therefore express anger and opposition to Screening Room at Cinemacon.

Yes, Screening Room could begin to succeed in increments, I suppose, but $50 a pop seems a little rich for me. Yes, it’s not so bad if you split it between yourself and three pallies ($12.50 per person) but who wants to invest in that scenario over the long run? $30 seems like a better price. Just you alone or you and your girlfriend or wife/kids.

If Screening Room eventually succeeds, the result will be fewer sophisticated filmgoers going to the megaplex, which — Tapley is correct — has been sullied if not taken over by the animals over the last 15 or 20 years. I’m talking about the descendants of Ezra Pound and T.S. Eliot who munch smelly junk food (cheese nachos, red licorice, hot dogs covered with mustard and jalapenos), check their cell phones during screenings, odorize the room with their smelly-ass socks, talk back to the screen, etc.

For true cineastes and Movie Catholics, theatres are churches. In their heads, at least. But for most people out there (i.e., the Joe and Jane Popcorns) theatres are multi-media amusement caves or large communal living rooms. I never go to see new movies on Friday and Saturday because of these people. I always go during afternoons or on weeknights. This is why I’d like to see Screening Room become a reality if they drop that $50 price.