The opening night presentation at the 2016 TCM Classic Film Festival (4.28 thru 5.1) will be “a 40th anniversary screening in collaboration with Warner Bros. Classics” of Alan Pakula‘s All The President’s Men. Who cares, right? Another theatrical screening of a movie we’ve all seen many times. Except it could be a significant deal if TCM and WB Classics are presenting a visually correct version of this 1976 classic. Because it needs correcting. Some of you might remember that ATPM cinematographer Gordon Willis complained about the most recent Bluray version in a 2011 HE interview. 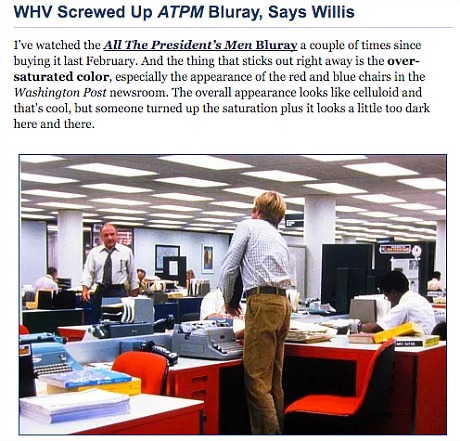 Willis comment #1 about 2011 ATMP Bluray: “It’s all fucked up…all the medium tones [are wrong] and contrast is way higher than it oughta be…it’s overloaded.”

Comment #2: “All they had to do was use the most recent DVD as a reference because that’s fine. They don’t get it. They get on those fucking dials…it’s a disease. Their idea for a Bluray is to make it for guys who are watching football.”

Comment #3: I asked Willis if he’d called anyone at Warner Home Video since the All The President’s Men Bluray came out to tell them they’d gotten it wrong, etc. “And what are they gonna say?,” he said. “We’re sorry and we’ll do it all over again? You call these guys, it’s like talking to a head on a stick.”

Will an improved, remastered, properly calibrated DCP of All The President’s Men screen at the TCM Classic Film Festival? Maybe, maybe not…who knows?

One thing I do know is that TCM spokespersons, who in years past have given excellent impressions of being frosty corporate types who huddle behind glass partitions and voicemail barriers in Atlanta, haven’t announced that a new version of the film is being shown. If that’s the plan, great. But good luck trying to get these monkeys to pick up the phone or respond to an email.

What matters most to the TCM Classic Film Festival organizers is attracting as many old tourists as possible to buy festival passes. They want those 60ish and 70ish Tuscon guys in their sandals and short-sleeve madras shirts lining up outside with their chubby wives. That’s what this festival is mainly about — trust me.