No Ben-Hur Love From Hammond

Deadline‘s Pete Hammond is one of the more gracious, turn-the-other-cheek columnists around. He doesn’t miss a trick but his natural wont is to be charitable or at least not backhand a film if it all possible. So his measured, less-than-cartwheely comments about Timur Bekmambetov‘s Ben-Hur (8.19) following yesterday’s Cinemacon presentation are instructive. 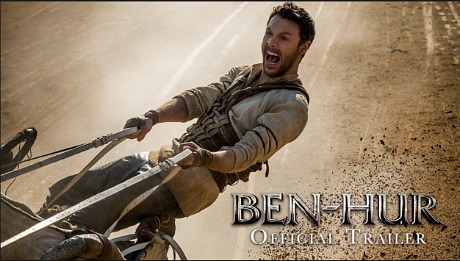 Referring to Paramount’s Las Vegas presentation of Teenage Mutant Ninja Turtles: Out Of The Shadows, Star Trek Beyond and Ben-Hur, Hammond wrote that he’s “not sure [if] any of these is necessary for anything but Par’s bottom line, but the crowd seemed happy to see them all.”

Then he said that Ben-Hur‘s “dog days of August opening gives one pause, but perhaps Paramount has discovered a faith-based audience dying to see a biblical epic like this at the end of summer.”

He added that Ben-Hur star Jack Huston, who showed up yesterday, “is trying to fill Charlton Heston’s shoes, and might come close based on the footage.” “Trying”? “Might”?

HE translation: The Ninja Turtles, Star Trek and Ben-Hur flicks might make money, but they all look like “product.”

An August opening suggests that Bekmambetov’s Ben-Hur is probably a dumper, but maybe the not-all-that-hip Christian audience will flock to Ben-Hur. This despite the fact that General Lew Wallace‘s tale has never been a Christian story in any widely recognized sense of the term. Ben-Hur has always been first and foremost a revenge piece with a Christian after-thought.

Jack Huston is obviously a poor man’s Charlton Heston just as the film itself appears to be a low-rent CG riff on William Wyler‘s Oscar-winning 1959 classic.