Rebecca Miller‘s Maggie’s Plan (Sony Pictures Classics, 5.20) is an intelligent, nicely honed, reasonably decent romantic triangle dramedy with Greta Gerwig, Ethan Hawke and Julianne Moore. It was widely reviewed during last January’s Sundance Film Festival, resulting in a combined 75.5% rating from Rotten Tomatoes (73%) and Metacritic (78%). I didn’t love it but it’s okay. It moves along, hangs together, does the job. I looked at my watch two or three times but I never covered my faced with hands or moaned or any of that other stuff. 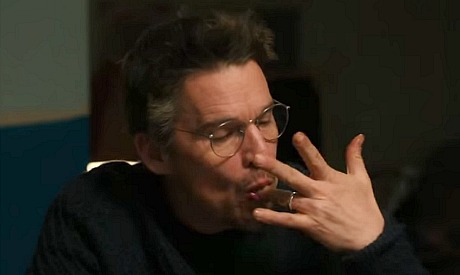 I’m not exaggerating when I say that I can never again consider the idea of seeing Ethan Hawke in a film without this image coming to mind. Fairly or unfairly he’s suddenly become an icon for the self-absorbed guy who licks his fingers after he eats.

I won’t burden you with the tangled particulars, but Maggie’s Plan is about a faintly neurotic academic type (Gerwig) and a somewhat older academic and would-be novelist (Hawke) falling in love and deciding to cohabit and have a kid after he leaves his former wife (Moore), a needles-and-pins controlling bitch type with whom he has two older kids. The second half is about Gerwig deciding to disengage from Hawke by way of a sly manipulative scheme when she realizes he’s not really in love with her and is more or less using her because she’s a great organizer-assistant type.

Why did I leave 7 or 8 minutes before it ended? Because I suffered an intense visceral reaction when Hawke licked his sticky, greasy, sauce-covered fingers for the third time.

The first time he did it I let it go. The second time I flinched but I buried it. “Don’t have one of your neurotic fits about this,” I told myself. And I’m saying this as someone who detests guys who lick their fingers after a meal. I’ve seen them go into action in cafes and restaurants from coast to coast, and it’s all I can do to keep from shuddering with disgust. But it’s also clear that Miller is trying to make a point the second time Hawke does it. By showing us that the finger-licking is bothering Gerwig, who’s already having concerns about her relationship with Hawke, Miller is obviously suggesting that it should bother us as well. I understood the strategy. Just don’t have him do it again, Rebecca. Please.

Something snapped when he licked them a third time. “Jesus God…that’s it!,” I said to myself, almost out loud. Hawke’s character is a smart, nice enough fellow in many respects but only a smug, self-absorbed asshole would lick his fingers this often, I reasoned, and I just couldn’t tolerate it any more. It was near the end (around the 85-minute mark) and I knew someone who’d seen it and would tell me how the final scene went, so I bolted.

Update: My friend told me this morning that at the finish Gerwig seems open to striking up a new relationship with a bearded pickle seller (played by Vikings guy Travis Fimmel). The pickle-seller seems like a gentle, considerate fellow but his beard is long and stringy and he wears those awful long shorts (or short pants) that expose about four inches worth of leg. You just know this guy is on the fence about using deodorant, has unpedicured, bad-news toenails and doesn’t trim his pubic hair.

What is happening to the culture when dudes like Fimmel, who exude woolly, hand-to-mouth, Eric-the-Viking street vibes that are maybe two steps above homelessness and are more or less offering a fuck-you to the classic tradition of the semi-cultivated, well-groomed middle-class guy who went to college and reads Esquire and books by Jim Harrison and Milan Kundera, are cast as nice-guy romantic alternatives? If I was a woman I wouldn’t even flirt with the idea of “doing” him, much less bringing him home to meet my parents.