What I Did On My Spring Hiatus

Screenwriter Vladimir (“Vladi”) Cvetko, the son of HE’s own Svetlana Cvetko, is a writer for the cable TV series Power and Kingdom. Over the last two or three weeks he’s been bopping around Europe. The natural thing would be to cruise chicks and catch rays in a couple of sexy beach towns, and for all I know Vladi got around to this. But he also recently visited a Syrian refugee camp in Idomeni, a village in northern Greece that’s just south of the Macedonian border, and all of a sudden he was no longer some Hollywood dude on the prowl but a photo-journalist in a conflict zone. 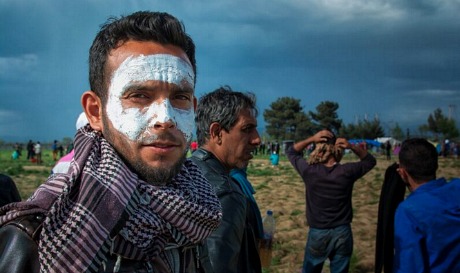 Mustafa Alhamoud, face coated in toothpaste to protect against tear gas, had pleaded with the Macedonians to open the border on April 10. (photo by Vladimir Cvetko)

What Vladi saw and heard was newsworthy. Young people in a tough spot, angry, pushing back against closed borders and a growing sense of despair while coping with tear gas. So he took photos and tapped out a 2000-word piece and sent it to the N.Y. Times (no response), the Wall Street Journal (declined) and the Los Angeles Times, among others. An L.A. Times editor liked the article but cut it down (as editors often do) to 900 words. It ran today as an op-ed under the title “Border Skirmishes.”

Excerpt: “I asked the young men who had faced down the troops if they understood what came after Macedonia — more troops, more political resistance and between three and five more border crossings on the way to their preferred destination: Germany. They shrugged. They were focused on the border at Idomeni. No matter how insignificant a step it might be in their journey, crossing would be cause for renewed hope.”

I wrote Vladi this morning to check on a few things. He’s currently in Belgrade, Serbia. He sent his article out to publications roughly a week ago. When he arrived in the Idomeni region he “rented a small apartment in Thessoloniki, about 50 minutes away, and rented a car,” he writes. “I brought a tent and sleeping bag along just in case, but I didn’t need to camp.”

All I know is that this is the kind of thing that writers of character do when they’re in some foreign territory. They nose around for action (not necessarily babes as much as political conflict, skirmishes, demonstrations) and then witness and write about it. This is right out of the Ernest Hemingway logbook of the 1930s (driving an ambulance in Spain during the civil war) and ’40s (witnessing D-Day).

The only thing Vladi seems to have missed out on was hooking up with some Syrian hottie in a pup tent and then getting threatened by her father or uncle or older brother when they got wind of what was going on. I’m not presuming that happened but if it had…well, maybe Vladi will fictionalize this some day in a screenplay. 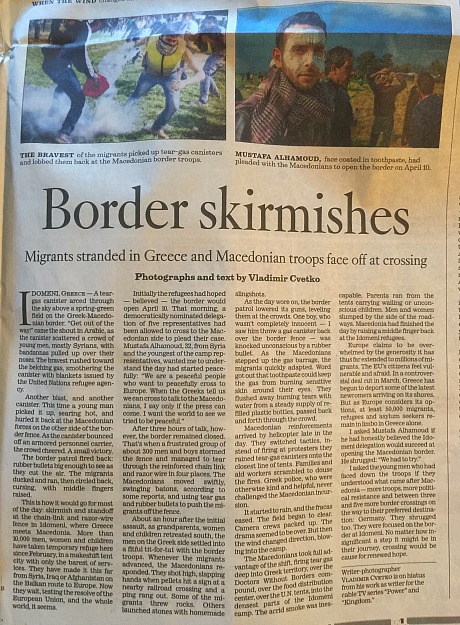