I just paid $20 and change for a Masters of Cinema Bluray of Andre de Toth‘s Day of the Outlaw (’59), a black-and-white “snow western” in 2.35:1. I succumbed against my better judgment because I’m queer for ’50s and ’60s films shot in this all but vanished format. (A cruddy-looking version is watchable on YouTube.) I will watch and consider buying almost any film shot in monochrome Scope. 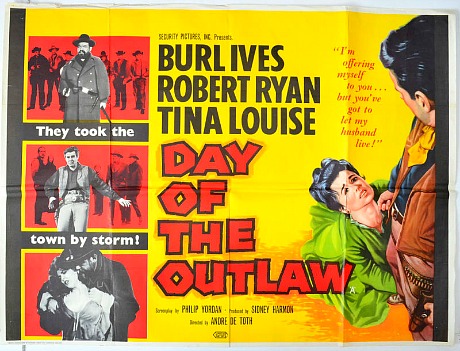 Day of the Outlaw costars Robert Ryan, Burl Ives and the then-24-year-old Tina Louise. It was shot by Russell Harlan and written by Philip Yordan, who also produced. Yordan told a Ryan biographer that the Outlaw script was “one of the best I’ve ever written” but that the $400K budget “wasn’t big enough.”

The fact that Quentin Tarantino has spoken highly of Day of the Outlaw is an anecdote at best — he was either plugging his own snow western, The Hateful Eight, or acknowledging that the De Toth was an influence. Martin Scorsese allegedly saying that De Toth’s low-budgeter exists in the same respected B-movie realm as Sam Fuller‘s 40 Guns and Budd Boetticher‘s Seven Men From Now is also a concern. Never trust impassioned film buffs when it comes to B westerns. They’re too kind, too generous.

The fact that the late David Nelson (brother of Rick, son of Ozzie and Harriet, costar of the ’50s sitcom) played a desperado in Outlaw while Rick was concurrently acting in Howard Hawks‘ Rio Bravo…well, there’s your perspective.

Is there anyone who worked on Day of the Outlaw who hasn’t passed on? Yes — the 82 year-old Tina Louise. I spoke to her on the phone two or three times in ’85 when I was working as an L.A.-based publicist for Bobby Zarem and Dick Delson. 51 at the time, Louise was one of Delson’s lesser clients, and she felt he was ignoring her or certainly not giving enough of his time for what she was paying him (which was true), and she was naturally pissed off and bitter about where her career was at the time. She was definitely on the downslope. I had no power, of course — no ability to make things better. So I just listened and agreed with her and told her she was a legend (in truth I saw her as a MILF) and promised to push her concerns with my employers. Hah!