Bringing Out The Grotesque

I’m crestfallen about Paul Schrader‘s Dog Eat Dog — a lurid, blood-splattered genre satire. It’s not that I don’t get the fuck-all, porno-violent attitude. I just don’t understand how or why a good fellow like Schrader would succumb to this kind of gaudy nihilism with such mystifying gusto. He’s taken a 1997 Eddie Bunker crime novel, which I haven’t read but is reputedly grounded in brutal reality, and made a dark, sloppy comedy of excess that only the animals will like and which only Cannes critics will praise with a semi-straight face. 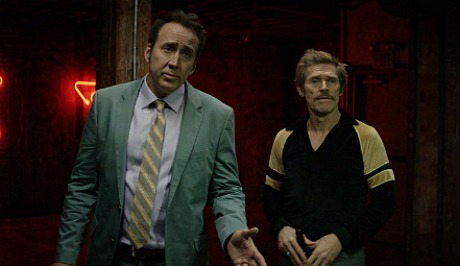 Dafoe’s performance as an imbecilic loose cannon named Mad Dog is in fact awful. Awful. Over-acting, desperate, flailing around. As a longtime Dafoe admirer I was embarassed for the guy. C’mon, man!

I’ll admit that Dog Eat Dog hits the amusement button maybe three or four times (Schrader’s dry performance as a crime lord is one of the few elements that satisfy) but mainly it’s a clumsy, splattery, tonally-chaotic wallow. I know it sounds unkind but the words “diarrhea dump” came to mind as I sat in the balcony this morning.

It doesn’t even feel professional half the time, and then at other times it feels relatively sane and well-measured and reflective of how some people process reality and how they actually behave, and then it goes off the rails again. If it hadn’t been directed by Schrader and hadn’t costarred Dafoe and Nicolas Cage it would be a bottom-of-the-barrel market film that nobody would even blink at.

It’s as if the finance guys said to Schrader, “Okay, we know you were enraged about what happened with Dying of the Light so you can have final cut, no problem, but we want a movie that the ‘international audience’ will enjoy. And by that we man the dumbest guys in New Delhi and Beijing and Seoul. We want chaotic fuck-all cynicism times ten. None of that subdued art-house Schrader stuff. We want depravity-plus…your characters blowing heads off, snorting coke, stabbing fat women in the back. And we also want you to totally torpedo what’s left of your exalted reputation. If you’re willing to do this, we’re prepared to sign the check right now.”

In response to which Schrader, the respected, world-class writer of Taxi Driver, The Yakuza, The Last Temptation of Christ, The Mosquito Coast, Bringing Out the Dead and City Hall and the director-writer of Blue Collar, Hardcore, American Gigolo, Cat People, Light of Day, The Comfort of Strangers, Light Sleeper, Affliction and Auto Focus, shrugged and said “sure, fuck it, why not…sign the check.”

The other day Schrader indicated to Indiewire‘s Anne Thompson that he knows what he’s done and how it will play. “You know there won’t be many people left [in Cannes when the film plays],” he said. “You can be killed. But I don’t worry, because we’re closing the Fortnight. Even the people with knives will be on the plane!”

Bunker’s crime novel was adapted for the screen by Matt Wilder, but, according to Thompson’s piece, Wilder “did another draft based on Schrader’s direction.” Schrader: “Bunker was a hard-ass crime writer. Matt’s script was very edgy, evil and funny. Evil and funny is just the place I don’t like going!”

I did like three performances. Schrader’s afore-mentioned cameo is succinct and low-key, and it’s this matter-of-fact gruffness that allows him to deliver the film’s funniest line. I was intrigued by some nicely flavorful emoting from Louisa Krause, sketching out a woman who hooks up with one of the baddies (Christopher Matthew Cook) in a bar and later in a hotel room. I was also affected by a nearly wordless performance by Magi Avila as a babysitter who’s traumatized by Cage, Dafoe and Cook during a kidnapping. She didn’t seem to be “acting” — she was right there.

May 20, 2016by Jeffrey Wells27 Comments
« Previous post
Conversation With A Master
Next post »
Mr. Moustache vs. Lovestruck Kids