But Not For Me

There’s a scene in Oliver Stone‘s W. when Laura Bush (Elizabeth Banks) tries to lift the spirits of husband George (Josh Brolin) by suggesting they should get tickets to Andrew Lloyd Webber‘s Cats, his favorite stage musical. In so doing Stone was deriding Dubya’s taste as well as Cats itself, which has long been dismissed as a rube show in the vein of Mamma Mia!. And now Tom Hooper, it says here, is planning to adapt Cats for the screen. I literally flinched when I read this. This is the kind of thing you’d expect Rob Marshall to direct, but Hooper? He’s obviously a competent helmer of films with unsubtle emotional currents, but this feels like a bridge too far. I’m saying this as one who at least respected Hooper’s handling of Les Miserables — another hugely popular, tourist-friendly musical. Not a wise career move, especially in the wake of the not-so-hot Danish Girl. 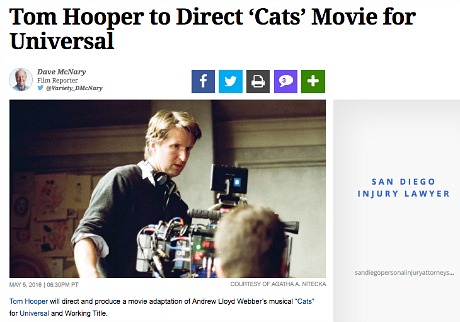