A segue is a transitional shift from one thing to another, handled with skill and finesse. But here in Prague’s Old Town (Stare Mesto) the term is spelled Segway, and every Tom, Dick and Doofus is roaming around on these things. I try to ignore the corruption metaphor (which I’ve complained about previously) but every so often I’ll give the Segway kids a dirty look. I love it when they notice this. 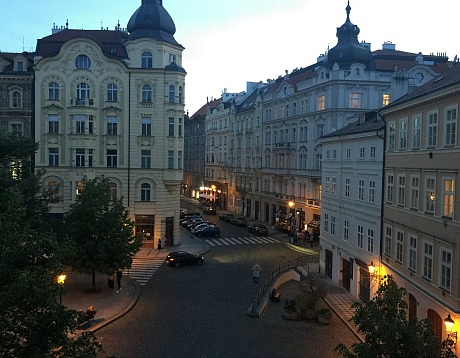 Yeah, Segways are “fun” but Stare Mesto (which used to feel like a medieval village with fine restaurants, pizza parlors and bars — now it’s more or less a Disneyland theme park) is a relatively small region so why not enjoy the walk? Good for your heart, your leg muscles, your soul. Typical Croc-wearing stooge: “Because walking on all those cobblestoned streets is a bit of a strain on our feet, plus we’re here to eat and drink and party.” There isn’t a dime’s worth of difference between today’s sloth tourists and corpulent Romans groping wenches in an episode of I, Claudius.

The other day I was searching for a Cannes-to-Nice Airport bus schedule, and I came upon a Trip Advisor thread comment from some guy who wanted to know if there’s a shuttle between the airport bus kiosk and the Cannes train station, which is maybe a seven or eight minute stroll. Somebody pointed out the short hike and the guy said, “Yeah, I know but I wanted to avoid that.” Another commenter jumped in and said, “Report to your trainer!”

Prague may be the most popular under-40 drinking town on the globe, which is one reason why I’m looking forward to visiting Belgrade next Wednesday and Thursday.

My ex and I honeymooned here in ’87, during a Communist party celebration of the 60th anniversary of the Russian revolution. Relatively few western tourists, the smell of soft coal in the air, no English spoken — a seriously different realm.

My second visit was in ’92, or three years after the Velvet Revolution. Remnants of old Prague were thriving. I shook Vaclav Havel‘s hand during a book-store signing. But it was also during that trip when I noticed that McDonald’s and other fast-food joints had set up shop. Now they all but run the place, or the neck I’m staying in, at least.

Why do I put up with the crap and the clutter and the Segways? Because Stare Mesto architecture still makes my heart go pitty-pat. At least the outlying neighborhoods (Podskali, Florenc, Smichov, Vinohrady) are still cool.