“Blood Father is trash, but it does capture what an accomplished and winning actor Mel Gibson can be. Just because he lost his bearings, and his career, doesn’t mean that he lost his talent. Going forward, if all he gets to do is angry-crazy Mel Gibson shtick in boilerplate thrillers like this one, it would be a shame. Blood Father looks like a throwaway, and it is, but the best way to think of it might be as an audition: a way to remind people that Gibson, if given the chance, could juice up a serious movie. At some point, he deserves to be let out of the Hollywood doghouse.” — from Owen Gleiberman’s 5.21 Cannes review. 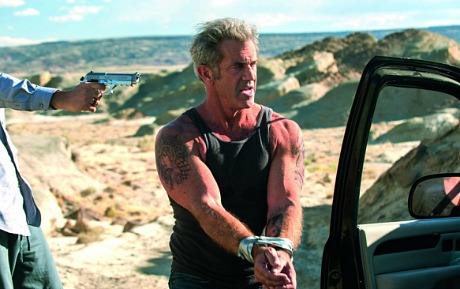 Response: Even if the 60 year-old Gibson hadn’t torpedoed himself twice, first with those 2006 anti-Semitic rants and then with those screaming racist epithets, he’d still be past his prime today. It’s natural for big-name actors to experience a little mojo loss at this stage. The difference is that Gibson went off a cliff. Twice. Tell me how he can alter the crazy-loon thing. I don’t see how.

Even if some forgiving producer or director was determined to resuscitate his acting career, what could Gibson be cast as? He can’t play romantic smoothies or refined cultivated types, not with those ’06 and ’10 imprints. He can’t be Richard Gere or Tom Hanks or Tommy Lee Jones. I could accept him as Jeff Bridges‘ old Texas Ranger in David Mackenzie‘s Hell or High Water, but he’s still got those negatives to contend with. I suppose Quentin Tarantino could cast him as an ornery grizzled sort (the kind of fellow Kurt Russell played in The Hateful Eight), but Gibson can never again sell the idea that he’s a man of trust, moderation and common sense. That pooch has been screwed and his prime potency period is over anyway.

Gibson had a good 23 years as a top-dog, well-paid star in quality fare (1979’s Mad Max to ’02’s Signs). He peaked with ’95’s Braveheart, which he directed, starred in and won a Best Picture Oscar for, and then earned qualified respect for his direction of The Passion of the Christ and Apocalypto, at least for the chops if not for the content. His latest directed film, Hacksaw Ridge, will pop in November, and he might get a bounce out of that. But acting-wise there’s nothing he can do beyond low-rent exploitation fare and/or crude comedies. And is that really so bad? At least it’s a marketable brand. He can always continue to direct, and he’s rich, and alive and kicking as it were.