In HBO’s All The Way, Cranston Is More Affecting Than He Was On Stage

For me, Jay Roach, Robert Schenkan and Bryan Cranston‘s All The Way (HBO, 5.21) is a more engaging thing than the Broadway play version, which I saw and reviewed exactly two years ago. (I expressed modest misgivings — the key phrase was “engaged but not emotionally engulfed.”) I know the Lyndon Johnson saga backwards and forwards, and yet I was gripped and fascinated by this strategic re-telling. It’s about as tightly organized, propulsive and snappy as anyone could reasonably expect.

And yes, Cranston kills as LBJ in a performance that hits all the highs and lows of his Tony Award-winning performance but with extra seasoning that allows for a bit more compassion. Most of Cranston’s stage performance was about LBJ’s grand overbearing manner and gusto with maybe 25% conveying his doubts and uncertainties. In the HBO film it feels more like a 60-40 deal.

Like the play version, All The Way lacks the emotional sweep and tragic dimension of Dave Grubin‘s LBJ, the 1991 American Experience documentary. The focus is strictly on Johnson’s first year in office (JFK’s murder to LBJ’s landslide victory over Barry Goldwater in November ’64), and as much as I would have preferred to see Cranston play Johnson in a five- or six-hour miniseries combining All The Way with Schenkan’s The Great Society (which was performed on stage in Seattle late 2014), that was never on the table.

And yet there’s no denying that the HBO version, like the play, is an expertly written ensemble piece and a crackling political drama. The bonus is that Roach’s film takes the story into more intimate realms. Like any good director would have, he finesses and intensifies in a way that no stage director could have managed. The camera doesn’t just stay close to Johnson but slips into his recesses, fears, inner determinations, anxieties. The film is more affecting for this effort. Yes, Cranston delivers all of the shadings and crafty impulses and whatnot — all the scrappy bombast that came through on stage but with a sadder, more vulnerable underside.

There’s an especially poignant moment in which Johnson greets one of his daughters (possibly Lucy Baines) in the Oval office, and somewhat perfunctorily. At first. But without a word Cranston conveys that LBJ is touched by her presence and is thinking about saying something more. He doesn’t. It’s over in a few seconds but the feeling lingers.

The strongest supporting performance is easily given by Aisha Hinds as MFDP co-founder Fannie Lou Hamer, whose wrenching testimony during the ’64 Democratic Convention about horrific jailhouse treatment by Mississippi cops blows you away, and Hinds does the job in less than three minutes. She’ll get a good bounce out of this.

Hamer’s televised testimony was so strong that LBJ felt it would agitate convention Dixiecrats, and so he pre-empted her with a sudden White House announcement, obligingly covered by all the network news teams. Except Johnson had nothing of any importance to say. The move backfired when everyone realized what his actual motive had been.

The exchanges between LBJ and FBI chief J. Edgar Hoover are more accurate in All The Way than they were in Ava Duvernay‘s Selma, which had Johnson ordering Hoover to get whatever surveillance dirt he could on Martin Luther King in order to pressure the civil rights leader into backing off from pushing too hard for a Voting Rights Act.

Here the taping is all Hoover’s doing, and when Hoover (Stephen Root) later plays the MLK sex tapes Johnson is amused but that’s all. Mostly he cajoles or pressures Hoover to do what he wants him to do, particularly in the wake of the 1964 Mississippi murder of the three civil rights activists.

King’s extra-marital affairs were alluded to in Selma, of course, but as far as I can recall they’ve never been shot or dramatized in any way. It’s therefore interesting that Roach almost does this (but not quite) in All The Way. At the end of a hotel conference scene MLK (Anthony Mackie), alone, looks in the direction of an unseen person and gently says “c’mon over here.” I gathered he was talking to a hottie but Roach never shows us anything. For all we know the unseen person could be Soupy Sales. Cut to Hoover playing an MLK audio sex tape for LBJ, and it’s not Soupy we hear moaning and groaning.

I also wish that Roach had included a chat that happened between Johnson and Congress of Racial Equality leader James Farmer. Here’s how Farmer recalled it, as quoted by the New Yorker‘s George Packer in an 8.24.08 article:

“I asked [President Johnson] how he got to be the way he was. He said, ‘What do you mean?’ I said, ‘Well, here you are, calling senators, twisting their arms, threatening them, cajoling them, trying to line up votes for the Civil Rights Bill when your own record on civil rights was not a good one before you became Vice President. So what accounted for the change?’ Johnson thought for a moment and wrinkled his brow and then said, ‘Well, I’ll answer that by quoting a good friend of yours and you will recognize the quote instantly — ‘Free at last, free at last. Thank God Almighty, I’m free at last.'” 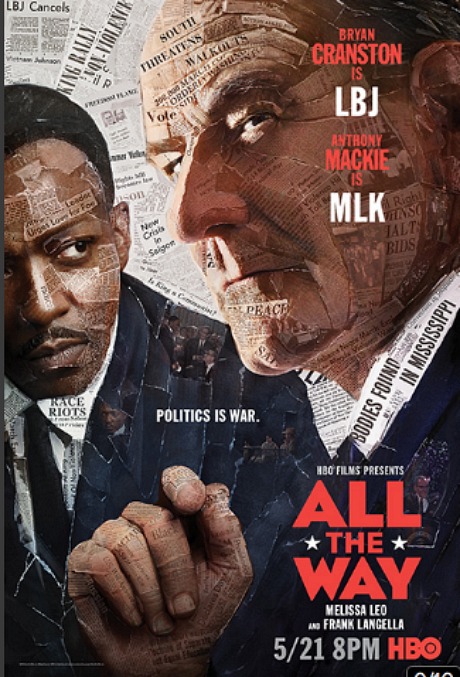