The more I meditate upon Jim Jarmusch‘s Paterson, the richer and deeper it gets. That’s usually the mark of an exceptionally good film, just as the opposite principle — an intense sugar-high movie will often dwindle upon reflection — is also true for the most part. Not always, of course, but often enough. 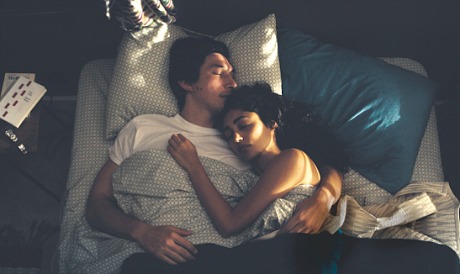 In traditional movie-plot terms nothing and I mean nothing happens in Paterson. No inciting incident, no conflict, no gathering of elements, no second-act pivot point, no climax. It’s all about impressions and meditation. But it’s good. It sticks, gains, expands.

This led to thoughts about other respected films in which “nothing happens.” Nothing, to amplify, in the way of the main character (a) having some specific goal, (b) interacting with or responding to contrarian characters or forces, and (c) finally taking decisive action to achieve a desired end. There are actually two categories — films in which literally nothing happens of any real consequence, and films in which very little happens. But emotional or spiritual journeys always occur.

The most interesting, view-worthy films of the last 20 or so years in which very little happens but which pay off nonetheless: Nebraska, Lost in Translation, Barcelona, Barton Fink, Shame, Hunger, Naked. There are many others. Please advise.

The standouts in which nothing really happens at all: Everybody Wants Some, Clerks, My Dinner With Andre, Dazed and Confused, Sofia Coppola‘s Somewhere…what others?

Two classic examples were directed by Michelangelo Antonioni, whom I still regard as The Absolute King of Nothing Happens. L’Avventura (’60) is a very-little-happens film (a sullen rich girl disappears during a visit to a small rocky island off the coast of Sicily and is never found) that offers no resolution about the disappearance. L’Eclisse (’62) is much more hard-core in that nothing whatsoever happens plot-wise except that Monica Vitti‘s character dumps a boyfriend (Francisco Rabal) and then gradually slips into an affair with a stockbroker (Alain Delon).

Paterson is about a soft-spoken bus driver (Adam Driver) who lives and works in Paterson, New Jersey, and whose name is Paterson. All he wants to do — all he does of any importance in the film — is write poetry by hand in a little composing book.

The situational or physical-activity elements are marginal. He lives with his loving, gentle-mannered wife Laura (Golshifteh Farahani) and a venal hell-dog named Marvin in a small dumpy house. Paterson drives the bus, is careful to show caring and consideration for Laura in the evenings and on weekends, and walks Marvin in the evenings. He writes poems whenever he can (during work breaks but mostly in a small basement room in the evenings and on weekends) but he’s always writing in his head, which is how writers are.

During the nightly dog-walk Paterson hits the same neighborhood bar for a beer and some chit-chat with the bartender (Barry Shabaka Henley). A second-act incident occurs in the bar that, yes, defines Paterson to a certain extent, but the incident doesn’t linger or reverberate. By saying “second act” did I just imply that Paterson has a three-act structure? I didn’t mean to.

Actually there is a kind of pivot point that happens when Paterson has a conversation with a young girl who also lives for poetry, and there’s a nice ending (not a climax or even a denouement but a kind of graceful downshift moment) with a middle-aged Japanese guy who’s also a poetry buff. Both encounters tap a little button inside Paterson that might lead to his writing advancing to a higher level. Maybe.

Review excerpt #1: “The quiet writing life and a general reverence for poetry becomes more and more of a thing as the film develops. Paterson itself is trying to be a kind of small, minimalist poem.”

Review excerpt #1: “Did I like it? As far as it went, yes. I respected what it was up to. The commitment, the quietude. Jarmusch certainly knows the realm and how to tailor his film so it feels like it came from notebook jottings and not from a novel or short story or even a screenplay.”

Review excerpt #13: “In this era of grotesque values you have to chuckle if not guffaw about Jim Jarmusch having made a film that basically says (a) ‘fuck all that,’ (b) ‘turn it down and plant spiritual growth seeds’ and (c) ‘dare to be dull in the ironic sense of that term.'”