HE review, posted on 4.11.16: “Luca Guadagnino‘s A Bigger Splash (Fox Searchlight, 5.6) is a noirish Mediterranean hothouse thing — a not-especially-sordid sex and betrayal story that builds so slowly and languidly it feels like there’s nothing going on except for the vibe, and honestly? It’s so lulling and flavorful and swoony and sun-baked that you just give in to it.” 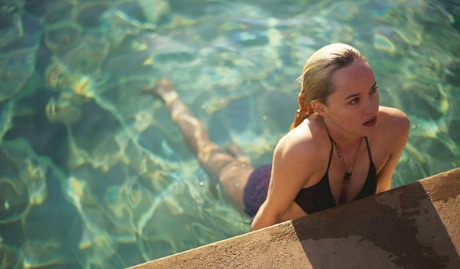 N.Y. Times review by Manohla Dargis, posted on 5.3: “The cinema of seduction doesn’t get much more overheated than A Bigger Splash, an Italian come-on that doesn’t just want to amuse you, but also to pour you a Negroni before taking you for a midnight spin with the top down.”

HE: “The undercurrent is gently mesmerizing, and that was enough for me. I can’t wait to see it again, or more precisely go there again. I felt like I was savoring a brief vacation. I’m not saying the dramatic ingredients are secondary, but they almost are.”

N.Y. Times: “Set on an Italian island slithering with snakes and beautiful people, the movie is something of a reluctant thriller about a rock star, her current lover, her former lover and a pretty young thing. Bad things happen, because, you know, life is pain — in the meantime, though, do enjoy the magnificent digs, the designer threads and the frolicking nude stars.

“Mr. Guadagnino knows how to decorate a movie, from Marianne’s manicured head to Penelope’s perfectly photographed bellybutton. Every fetishized element — the glorious house, the tiled pool, Marianne’s Dior outfits and the scrubbiest of vistas — looks ravishing, ready for a close-up, too. The world that Mr. Guadagnino creates is at once seductive and aspirational, and another reminder that movies have always excelled at stoking consumer desires.”

HE: “A Bigger Splash takes a while to kick in but it’s eventually about underlying agendas and sexual ploys and finally an accidental (certainly half-accidental) homicide, but I was so taken by the laid-back atmosphere, and the sense of almost tasting the wine and smelling the afternoon wind and the warm ricotta cheese from my seat…it’s really something to sink into.”

N.Y. Times: “Much like Nancy Meyers (The InternHE: “You feel so nicely brought along by Yorick Le Saux‘s sun-speckled afternoon cinematography and Walter Fasano‘s disciplined cutting, and by the nostalgic Rolling Stones vibe (there’s a lip-synch dance sequence that made me fall in love all over again with ‘Emotional Rescue’) and especially by Ralph Fiennes’ giddy-ass, run-at-the-mouth, rock-and-roll madman performance that I was going ‘wow, I almost don’t even care what may or may not happen in this thing.’

“Yes, things have to happen in a murder tale but this is one of the least plot-driven films I’ve ever settled in with. It delivers the kind of atmosphere that you’d like to go on vacation with. (Or get high with.) It made me feel like I’d almost been there.”