The opening weekend of the 2016 Cannes Film Festival looks a teeny bit soft, and yet the first two nights (Wednesday, 5.11 and Thursday, 5.12) seem to promise some degree of intrigue. How can you go all that wrong with Woody Allen‘s Cafe Society, Jodie Foster‘s non-competitive Money Monster (which, by the way, a friend said he “really liked…the ‘system is rigged, Wall Street is corrupt’ theme plus the [narrative of the] Jack O’Connell character is tailor made for Trump and Sanders messaging”) and Christi Puiu‘s SieraNevada? The Romanian-made family reunion drama will likely prove the strongest of the three. 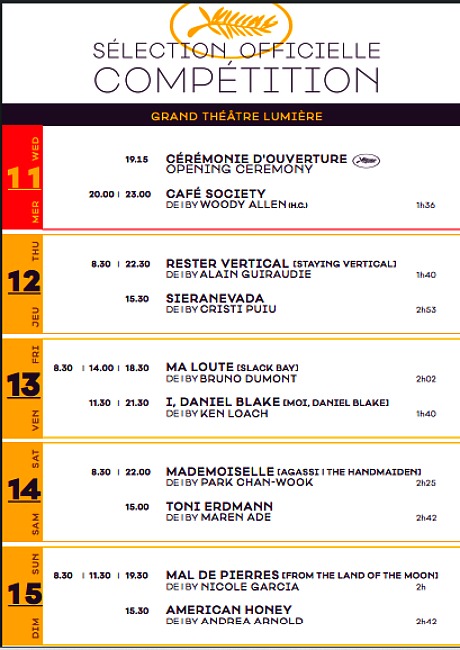 I’m not very interested in seeing the weekend’s two big non-competitive attractions — Steven Spielberg‘s The BFG on Saturday (which I’m not firmly committed to blowing off but I just might) and Shane Black‘s The Nice Guys on Sunday. I won’t skip the latter but I’m kind of half-dreading what will almost certainly be a wallow in formulaic ’70s rowdyism with Ryan Gosling and Russell Crowe.

My nose tells me things will pick up considerably between 5.16 and 5.20. Monday’s quartet will begin with Jeff Nichols‘ Loving, followed by Jim Jarmusch‘s Paterson, David MacKenzie‘s Hell or High Water and the restoration of Marlon Brando‘s One-Eyed Jacks (which starts at 10:30 pm or more likely 10:45 pm after introductions, which means this 142-minute film will finish a bit after 1 am). 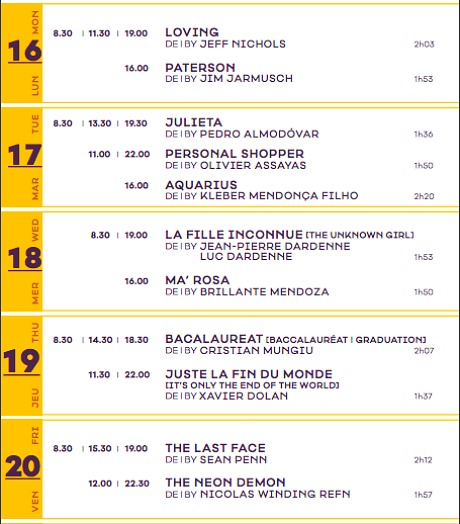 Thursday’s slate seems particularly strong with Cristian Mungiu‘s Graduation (Bacalaureat) and Xavier Dolan‘s It’s Only The End of the World.

I leave on Saturday so I’ll have to find some way to catch early-bird market screenings of two 5.21 films — Paul Verhoeven‘s Elle and esepcially Asghar Farhadi‘s The Salesman.

My other two Directors’ Fortnight essentials are Pablo Larrain‘s Neruda and Laura Poitras‘s Risk. I might try to squeeze in Alexis Bloom and Fisher Stevens‘ Bright Lights, a doc about Debbie Reynolds and Carrie Fisher. (The Cannes programmers have somehow persuaded themselves that Fisher’s last name is spelled “Fischer.”) I obviously haven’t included anything from the Un Certain Regard and Critics Week slates, but I’m working on it.

That’s about 26 films over the course of ten days — par for the course. 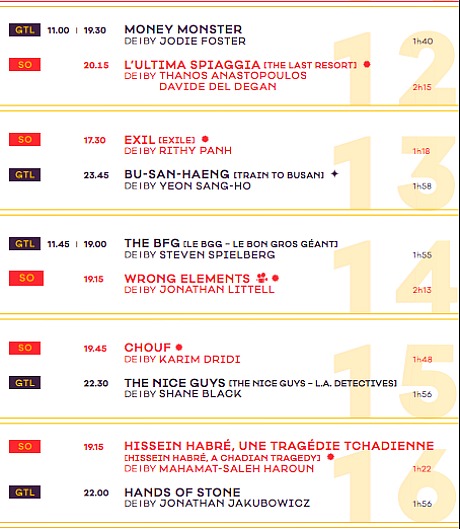 May 8, 2016by Jeffrey Wells27 Comments
« Previous post
In HBO’s All The Way, Cranston Is More Affecting Than He Was On Stage
Next post »
Son of Smell of the Crowd