Too Many Irritated Family Members In A Too Small Apartment, Most of Them Puffing Like Chimneys

I respect the scheme and intent of Christi Puiu‘s Sieranevada, which I saw last night at the Salle Debussy, but I felt constantly under-nourished throughout the 173-minute length, and I’m afraid that translates into a no-go. And I’m saying that as a genuine admirer of the Romanian cinema aesthetic — austere, raw behavior as opposed to “acting”, long takes. I wasn’t miserable as I sat there, but there’s no way I’ll sit through it again. No. Fucking. Way.

Sieranevada is about a truckload of sullen, pissed-off behavior and enough indoor cigarette smoking to send an Olympic athlete into intensive care, but there’s too little beef. I heard someone mutter “frustrating” as everyone was shuffling out; the words I had in mind were “opaque” and “somewhat draining.”

Sieranevada is a smart film with a bold approach, but it’s not going to satisfy your boilerplate American arthouse audience, I can tell you. It’s no Four Months, Three Weeks and Two Days and it’s no Tuesday, Before Christmas either.

What did I actually get from it? I was reminded how great it can be to not have to deal with a large family. And I learned what a difficult thing it can be to find a parking spot in Bucharest without blocking someone or parking in someone else’s space and getting into a heated, nearly violent argument with the owner.

Basic Sieranevada message (apart from the basic one about families accelerating or intensifying the aging process and draining your soul): Don’t own a car, take public transportation.

Mostly occuring in a too-small, over-stuffed apartment in Budapest, Sieranevada is a real-time capturing of a family’s memorial gathering for a recently deceased uncle. The main character is a burly, graybeard doctor named Lary (Mimi Branescu) and Laura, his shrewish, high-strung wife (Catalina Moga) who doesn’t attend in order to hit the post office before 4 pm and then buy groceries at the local Carrefour.

The secondary characters are Lary’s brothers, an aunt or two, a philandering uncle, a deluded priest (is there any other kind?), somebody’s grandmother, a teenager or a 20something, an infant. Everyone except the priest and the infant and maybe one of the aunts smokes like a chimney, and nobody so much as thinks about opening a window.

You could say that Sieranevada is about claustrophobia in all of its forms — physical, emotional, psychological. I’m not saying it is that, but you could certainly suggest that as conversational opener.

I believed everything I saw and heard — there’s never the slightest doubt that this is what a large, middle-class Bucharest family could very well be like. And you have to admire the work that went into the long takes and the precise choreography that the actors had to follow, but my main thought as the film nudged along (apart from “why doesn’t someone open a fucking window and let some of the smoke out?”) was “God, I really wish this was happening in a larger, more elegant apartment.”

But it’s not and that’s the point. They’re stuck with each other and there’s not enough space or breathing room. Call this a metaphor for the human planetary condition these days, if you want. Or forget the metaphor and just make a point of never visiting downtown Bucharest on a limited budget, and if you visit anyway you definitely don’t want to rent a car.

Somewhere around the 145-minute mark Lary receives an urgent call from Laura about a parking dispute outside the building, and as he leaves the apartment and steps outside the feeling of release is glorious — thank you, God! Fresh air and a respite from the in-laws!

Soon after Lary and Laura have a discussion in the car after some family recollections. They’ve caused Lary to break down, but I had trouble understanding exactly what he’s weeping about aside from the fact that…fuck it, too obscure. And then he says something to Laura about how he’s been lying to her. A confession of infidelity? No clue — the “lying” is never explained.

I was also thinking about how Branescu, who’s only 42, is looking a little worse for wear. Gray hair, bulky frame, a general aura of weariness. Six years ago, at age 35 or 36, he was persuasive as a cheating husband with a foxy dentist girlfriend in Tuesday, Before Christmas. Well, no more make-believe boom-boom for Branescu. He looks like he’s pushing 60, for Chrissake. In desperate need of a treadmill and a better diet. From here on in he plays nothing but weary pudgebod bureaucrats…guys who are bent over from the stress of things.

Incidentally: Tuesday Before Christmas is viewable on Amazon, and for free if you’re an Amazon Plus member. 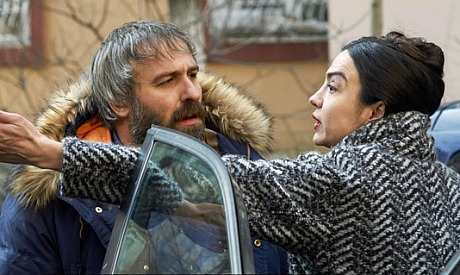 May 11, 2016by Jeffrey Wells2 Comments
« Previous post
Don’t Get Too Crazy
Next post »
Love Hurts But What Else Is New?