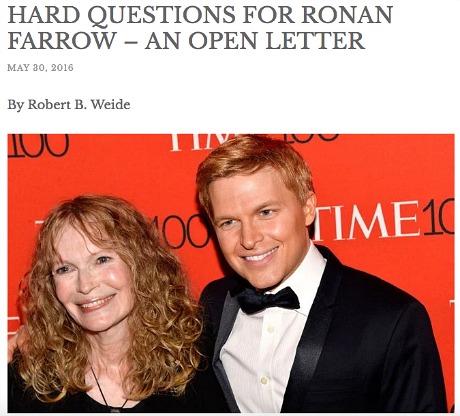 Key Weide paragraph: “I read your recent article for the Hollywood Reporter, in which you hold the media accountable for giving your father a pass, and not asking him ‘the hard questions.’ I found the piece to be disingenuous, irresponsible and even dangerous. You and your mother have both asked that the press continue to hold Woody Allen’s feet to the fire in the name of ‘women everywhere’ and ‘all abuse survivors.’ But there is plenty of evidence to suggest this isn’t really your primary concern.”

May 31, 2016by Jeffrey Wells22 Comments
« Previous post
Bubba’s Hurtin’ Too Much To Care
Next post »
Don’t You Believe That Aykroyd