As A Cannes-Attending Journo Who Accidentally Missed Neon Demon Screening, I Have The Right To Post A Reaction or Two

The Broad Green guys are asking U.S. critics to refrain from posting about Nicholas Winding-Refn‘s The Neon Demon until just prior to the 6.24 opening. I only saw it last night, but since I was at the Cannes Film Festival when it screened there on 5.19, striding around with my pink-with-yellow dot press badge and slurping the cappucino, and because I happened to miss it only because I was caught up in writing something and forgot to notice the time….I think I’m entitled to say at least a couple of things.

While it was booed to high heaven by many Cannes critics I found The Neon Demon irritating but nowhere near as unwatchable as Only God Forgives. It’s slow as molasses and under-written to a fare-thee-well, but it has a certain integrity. It holds back, holds back, holds back…and then it doesn’t really pay off. Well, it does but in an underwhelming, “is that all there is?” kind of way. And that, as Tony Montana would say, takes balls. 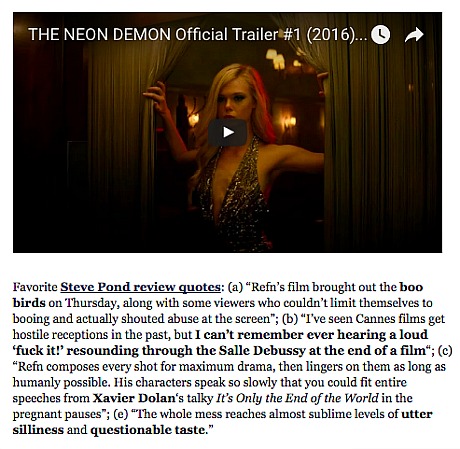 NWR knew exactly what he was doing when he shot and cut this thing, and it’s clear that he simply decided “fuck it…this movie is going to play the game with a very, very slow clock. Because this is who I am and where I’m at.”

The Neon Demon has what could coarsely be described as “some hot lesbo action”, a little necrophilia, a little touch of cannibalism in the night…and all in the service of a rather mundane observation about models in the fashion industry being bent out of shape by highly competitive feelings about each other.

You can call it this or that, but it’s basically a haute couture, high-concept, high-gloss Elle Fanning wank-off movie for men and women with a certain cultured urban attitude (i.e., people who live online, who know all about that thousand-yard stare, who once did drugs but no longer, and who like the feeling of concrete and asphalt under their sneakered feet). Which is to say that NWR employs a certain restraint.

Fanning (who was 17 during filming — she was born on 4.8.98) is told during a photography studio scene to take everything off, and she does…but NWR keeps the camera focused on her face and upper chest area the entire time. He’s obviously “going there” but at the same time he’s teasing, you see.

At the end of the day I respect The Neon Demon for this restraint along with the infuriating slowness. I hate films in which actors seem to be thinking about what to say for 15 or 20 seconds and then finally say it in a breathy, barely audible way, and all that comes out of their mouths are words like “what did you say?” or “I’m not sure” or “I didn’t do anything.” That, to me, is the mark of a strong filmmaker who knows he’s dealing with a certain tumescent aura but doesn’t give a shit what guys like LexG might want, and for that I respect him.

Did I “like” The Neon Demon? Not really, no, but it’s not fair to trash it outright. NWR made the movie he wanted to make. It is what it is.

June 7, 2016by Jeffrey Wells9 Comments
« Previous post
Never Let Those Martian Supporters Forget How Full Of Shit Their Best Picture Predictions Were
Next post »
Imagine A Gay….Okay, A Bisexual Daniel Plainview, Egomaniacally Swaggering Around Midtown Manhattan of The ’50s Rather Than Oil Fields of California