HE to Guy Lodge, Richard Lawson, Eric Kohn, Stephanie Zacharek, Peter Bradshaw, Robbie Collin, Tim Grierson, Jake Howell and others who were hugely impressed by Olivier Assayas‘ Personal Shopper: We were all knocked back when it played in Cannes five weeks ago, but a few too many critic friends have since told me “nope, not for me, didn’t care for it,” etc. And yet some of these same naysayers liked or even loved The Conjuring 2, which operates way, way below the level of Assayas’ film. And that, to me, is appalling. 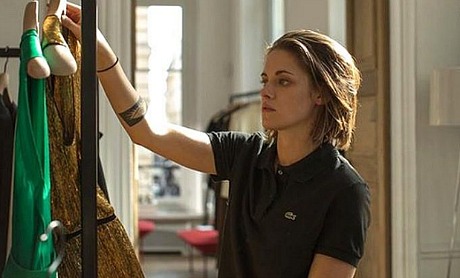 All I can figure is that Personal Shopper is too antsy and schizo for some people. It’s too teasing and darting and inconclusive. It doesn’t behave like other ghost stories, and some just don’t know what to do with it. So they toss it and wash their hands.

Have any of you thought about the schism between admirers and dissers? What are your thoughts? What’s going on here?

There’s not the slightest doubt in my mind about how uniquely chilling and riveting this film is — it’s my second favorite film of the year after Manchester by the Sea — and how stunningly good Stewart’s performance is. And yet two or three days ago Tom Luddy and Julie Huntsinger of the Telluride Film Festival were both telling me how they didn’t care for it. C’mon!

I posted a short “Friends of Personal Shopper” piece in Cannes on 5.17, but here’s a more comprehensive rundown of the best raves:

“Personal Shopper is strange, frightening, and possessed of a dark ribbon of sadness that no champagne gulped down at a post-screening beach party could drown out. There are certain scenes — scored by ominous thuds and whispering wind — that are so frightening that they were, for this wimp, extraordinarily hard to watch. A horror movie with a matte, flat-faced demeanor [and] a grief drama with a shiver of sylphic humor, Personal Shopper is as cathartic as it is terrifying, as knowing and wise about the weirder mechanics of the grieving process as it is utterly confusing.” — Richard Lawson, Vanity Fair.

“Personal Shopper is like a triple death jump without a safety net, one of the bravest and risk taking films that have ever been shown in Cannes. — Carlos F. Heredero, Caimán Cuadernos de Cine.

“This is a measured, richly ambiguous work about the subjective process of grief — masquerading as a ghost story — that experiments with the minutiae of film language as only a master of the medium can do. [It’s] a cinephile’s idea of a horror movie, their headiest ingredients elevated to an abstract plane. The slick camerawork, slow-burn tension and mysterious circumstances have less to do with shock value than the interior processes behind it. Audiences unwilling to wrestle with this fascinating gamble demonstrate the worst fear plaguing moviegoing culture: Something different.” — Eric Kohn, Indiewire.

“Among the many things that appear to be on Assayas’s mind is the disembodied — and disembodying — nature of modern-day communication and social media, which makes ghosts of us all to those with whom we text far more than we talk. Perhaps no film has ever made the mobile phone quite such an instrument of tension: the on-screen iPhone ellipsis of an incoming message takes on a breath-halting urgency here. No more should be revealed about the film’s gliding, glassy sashay through multiple, splintered genres and levels of consciousness – except to say that Assayas, working in the high-concept, game-playing vein of his Irma Vep and demonlover, is in shivery control of it all.” — Guy Lodge, Time Out.

“Personal Shopper was booed not because it’s bad (it emphatically isn’t), but because it breaks lots of good-taste conventions in a way that’s deliberately designed to set your soul jangling. For one thing, it features explicit — and occasionally terrifying — supernatural elements, but it isn’t a horror or fantasy film, and they’re presented without a smidge of insincerity or irony. For another, it elongates and teases when other films would accelerate and summarize. Stewart’s performance is detailed and considered yet shiveringly natural: it might even be the minor-key equal of her César-winning work in Clouds of Sils Maria.” — Robbie Collin, The Telegraph.

“Assayas taps a wellspring of thought on forms of communication [while drawing] parallels between 19th century drawing-room seances and Skype calls. In Personal Shopper, death is just another form of alienation, a physical remove from a person we once knew. Words themselves come under close scrutiny, and Assayas asks if we can ever truly connect with another person if we’re not standing right in front of them and communing fully with the senses. The incessant buzz of a smartphone becomes an attention-grabbing scream from out of the ether.” — Little White Lies’ David Jenkins.

“It’s a must-see for anyone who wonders what it might look like if a cerebral French art-film director tried to make The Conjuring 3…a film that’s attempting something singular. Which is preferable: a movie that’s consistently engrossing, but fails to stick the landing, or a movie that’s so-so for much of its duration, but delivers a conclusion that retroactively enriches everything that preceded it?” — Mike D’Angelo, A.V. Club.

“We’re not entirely sure of what to be scared of: a human stalker, a psychological disfiguration, an evil spirit or a kind one. Is the supernatural a consequence of Maureen’s instability, something metaphysical or a force that can’t be explained or identified? Honestly, I don’t think even the film knows. It allows the mysteries to sit there, to not make sense of anything and to allow the unease to simmer without fully defining what happens. This can be frustrating: it’s a mystery without a solution, a whodunit without a perpetrator. But this is cinema about faith and bolstered by it: we fear only what we can imagine, not what is seen. — Josh Cabrita, We Got This Covered.

“Assayas is working on a deeper, more metaphoric level, abandoning strict narrative cause-and-effect logic to give us fragments of Maureen’s life refracted through conflicting experiences. Nothing happens in this film as a direct result of what came before, which explains why the sudden appearance of suggestive, potentially dangerous text messages can be interpreted as a literal threat or as some strange cosmic manifestation of other, subtler anxieties.” — Tim Grierson, Paste magazine.

“Personal Shopper wrings the most out of every moment, which occasionally messes with the tonality of the film and the flow of a coherent narrative; is it a horror film or murder mystery or a coming-of-self drama? But Assayas and Stewart both exhibit masterful command in their grasp of twisty storytelling and full-bodied characterization; the joy is in deciphering their examination of an unsatisfying existential familiarity, presented in a most unfamiliar manner.” — Simon Foster, Screen-Space.

Sidenote: Personal Shopper delivers a few agreeable seconds of Stewart in a mostly uncovered state. If she and Assayas had somehow made this film three or four years ago, LexG (who of course has since moved on to younger talent) would have succumbed to cardiac arrest in his seat.