I’ve read that Hollywood beauticians and makeup artists of the 1930s regarded Katharine Hepburn‘s facial freckles as appalling, and that they constantly (a) covered them with pounds of base and (b) urged dps to shoot Hepburn’s CUs with a vaseline-smeared lens. By the ’50s or certainly by the ’60s this view had more or less subsided. The culture has long accepted freckles as appealing or even beautiful, but I’ve never fully agreed. A smattering of freckles across the nose and upper cheeks is…well, fine. Reddish, light-brown pointillist accents upon alabaster skin. But I still prefer creamy, freckle-free complexions. Sue me. 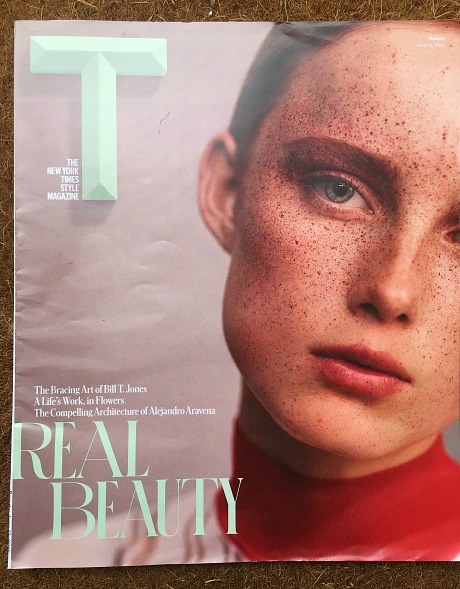 I’m mentioning this because I was definitely going “whoa” when I gazed at that super-freckly model on the cover of yesterday’s New York Times Style Magazine, especially with the slogan “Real Beauty” placed to her left. Those hundreds if not thousands of teeny black and brown markings don’t look like freckles as much as…I don’t know what to call them. They’re like a cross between Hepburn or Lindsay Lohan-style freckles and…I’d better not say any more. The p.c. Twitter banshees (who, don’t forget, yesterday tried to have me flayed when I admitted to having speculated in my head in the immediate wake of the Orlando slaughter that the shooter might be a radical Islamic wacko) will probably shriek like Donald Sutherland at the end of Invasion of the Body Snatchers over what will sound to them like freckle prejudice.

Today’s p.c. liberal fascism mandates that any non-admiring, even slightly critical comment about any aspect of anyone’s anatomy is a form of “shaming,” and that the shamer must be either stoned, drowned, beheaded or torn to shreds by wild dogs.