Support on Patreon Follow @wellshwood
44 Comments
If Hillary Picks Tom “Even Worse Than Tim Kaine” Vilsack For Her VP, Something Inside Me (My Soul?) Will Shrivel and Die

As a prospective Democratic vp candidate Tom Vilsack, the current Secretary of Agriculture and Iowa governor from ’99 through ’07, is an even more depressing prospect that Virginia Senator Tim “basketball-head” Kaine, whom Hillary also likes.  Hillary needs a running mate with charisma, eloquence and pizazz — qualities she lacks.  There’s something odiously settled and sedate about the guy. He’s in no way an X-factor type. That jowly, heavyish face (he has a semi-inflated-balloon neck wattle) makes him look like a Pavillions manager or a cattle owner or an airline pilot or some guy who lives down the street and mows his lawn every weekend. He looks like a family man who eats meat loaf, mashed potatoes and string beans every other night. Vilsack seems like a decent fellow, but the dullness! I don’t want this platitudinous meathead taking over if Hillary should meet with tragedy. I want my girl Elizabeth Warren. This is awful…awful. 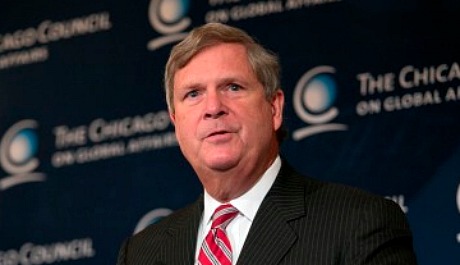 “Less purposeful than last year’s Bone Tomahawk, less mannered than The Hateful Eight and less gruesome than either (a bit of a let-down when considering the credentials of [director] Ti West), In a Valley of Violence is a tepid pastiche that’s a touch too comfortable with its own lack of vision. Fortunately, West comes at this material from a place of love, and his film’s most familiar moments reflect the greatest of what the genre has to offer. Expertly choreographed, and kissed with our strange nostalgia for a lawless fantasy world, the inevitable climactic shootout suggests that West has watched enough John Ford and Sam Peckinpah to know that all the best showdowns feel like bad theater.” — from a 6.14.16 review by Indiewire‘s David Ehrlich.

Early this afternoon major news sources all began to report that Fox News chief Roger Ailes has been officially whacked over sexual harassment allegations, but that he “may” be leaving with a guaranteed $40 million payout deal. Ailes had been under an internal investigation following a sexual harassment and wrongful termination lawsuit by former Fox anchor Gretchen Carlson. New York‘s Gabriel Sherman reported yesterday that Megan Kelly told investigators that Ailes made unwanted sexual advances about ten years ago. As I understand things Rupert, James and Lachlan Murdoch have apparently terminated Ailes or irrevocably decided he’s toast. Will Fox News becomes less evil without Ailes behind the wheel? Of course not. Update: The Fox back-room maneuvering is getting pretty wild, according to this Breitbart report by Matthew Boyle. 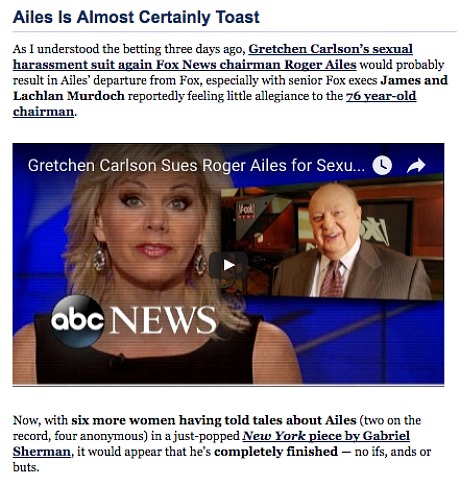 If the Trump campaign could turn back the clock to yesterday afternoon, would they eliminate the portions of Melania Trump‘s speech that were obviously cribbed from Michelle Obama‘s speech before the 2008 Democratic Convention, and thereby avoid the plagiarism headlines that have dominated newscasts since last night? Of course they would. The fact that they didn’t catch the mistake and fix Melania’s speech tells you two things. One, the Trump campaign is a sloppy, haphazard operation, which is due to the fact that Trump is a gruff, moody guy with a short attention span — period. A silly blunder of this sort is an indication of how a Trump administration would be run if, God forbid, he moves into the White House next January. And two, Donald Trump doesn’t admit errors or apologize, and so Paul Manafort is trying to call the Melania plagiarism story “absurd” and overblown and is even trying to sell the idea that Hillary Clinton orchestrated the whole thing,

I won’t be seeing Paul Greengrass and Matt Damon‘s Jason Bourne (Universal, 7.29) until next Monday’s all-media screening. It screened last night in Las Vegas, but to my knowledge no thoughts have been posted. I like the reported claim that Matt Damon has only 25 lines of dialogue. But I’m feeling a tiny bit crestfallen after hearing from a guy who saw it yesterday.

Recent insect antennae vibrations + Universal’s reluctance to hold the all-media until three days before the Thursday night opening suggested it might not be a totally wowser, power-punch knockout. Like everyone else I was hoping for something fast, crazy, smart and high-throttle. Now all I’m counting on is a riveting final half-hour. Then again it’s better if an action thriller delivers in the final 30 rather than peaking during the first or second act…right?

I’m not going to get into specifics but the last 30 minutes or so, which includes a noteworthy car chase in Las Vegas and a hand-to-hand combat sequence, are “exciting,” he confides. But that’s all that really got him. “They should have stopped at the third installment,” he says. “Or the third and a half if you count The Bourne Legacy.

Jason Bourne has “the same jiggly camera approach” — for years I’ve been calling it “Paul Greengrass shaky-cam” — but “there’s too much high-tech bullshit” when they’re chasing him in the earlier portions.

“The first 90 minutes is basically Tommy Lee Jones and Alicia Vikander in some control room, booting up instant feeds and deploying all sorts of facial-recognition software and other high-tech tricks. Vikander is the only one who gets to do anything interesting; Jones mostly spends his time glowering and barking orders.

9 Comments
Gilroy’s Bourne Flick Was Better Than Some Recall

With the Jason Bourne hype increasing and the opening days away (Friday, 7.29), more and more journos are reviewing the four-film Bourne franchise. It’s telling that no one wants to include Tony Gilroy‘s The Bourne Legacy in these assessments, and that Bourne auteurs Paul Greengrass and Matt Damon are on record as not being fans.

Well, I watched Legacy last night and I’m here to re-state that it’s not half bad. Here are portions from my 8.6.12 review — nearly four years ago.

“Tony Gilroy‘s The Bourne Legacy is a respectable 7.5 compared to the 8.5 or 9 that is Paul Greengrass‘s Bourne Ultimatum. That’s definitely not a putdown as I felt fully engaged and occasionally revved by this fourth installment. I just wasn’t floored or super-throttled. It didn’t leave me breathless, but I wasn’t the least bit bored and I took no texting or bathroom breaks.

“You can bitch if you want, but Legacy is what it is — a smart, cagey, nimble and well-crafted Bourne flick without Matt Damon but with the steely and severe and highly expressive Jeremy Renner.

“But Gilroy is capable of much more than delivering a Bourne-eo follow-up to two Greengrasses and one Doug Liman. He’s a highly efficient helmer who knows from high-end coolness, and who lives in a refined and sophisticated realm, etc.. The comfort and excitement levels are considerable in Legacy, but I wanted something deeper, crazier, darker, stranger. Or more layered. Or dryer. Because Gilroy is Gilroy. He’s no sequel-izer bunny.

There’s always ugliness in the Twitter stream. There’s always an asshole or two or three, or sometimes an army of them. The shit will last for a few hours, an evening, a day, never more than a couple of days. If you’re the victim it’s best not to feed the fire or, worse, pour gasoline on it. It might feel necessary at first to fight back with anger, indignation, counter-tweets. (Lord knows I’ve been there.) But it’s better, I feel, to ignore the voices from the bottom of the barrel. I’m sorry for what Ghostbuster costar Leslie Jones went through today, but the best response is dismissal. It didn’t happen, don’t engage…”what mosquito?” 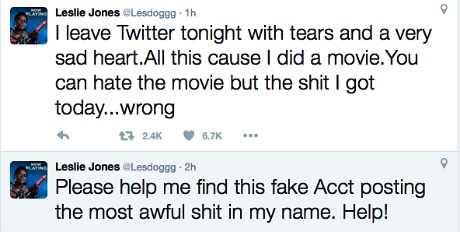