Cimino Is Gone, Although He “Died” Decades Ago

Director Michael Cimino has died of an unannounced cause. He was probably 77. He was respected for his directorial command and tenacity (certainly by the F.X. Feeney-led revisionists) and if nothing else was clearly an exacting visual composer. But his rep was compromised by two things. Well, one thing really — Heaven’s Gate, the ruinous 1980 epic that bombed at the box-office, all but murdered Cimino’s career, destroyed United Artists and brought about a seismic change in Hollywood culture — the death of the auteurist era that had begun in the late ’60s/early ’70s.

The other compromising thing was more of a curiosity, which was Cimino’s decision to completely transform himself in the ’90s from the slightly heavyset, jowly-looking New York guy he was in the ’70s and ’80s into an androgynous, rail-thin, plastic-surgerized life form that seemed even more extreme than what Michael Jackson eventually did to himself.

Say what you will about The Deer Hunter or Year of the Dragon or The Sicilian or Thunderbolt or Lightfoot, but there’s one thing you have to admit about Cimino, who made them all. The failure of Heaven’s Gate, which had been an albatross around Cimino’s neck for the last 35 years of his life, pretty much destroyed the mystique of the great, bowed-down-to Hollywood director.

Before Heaven’s Gate, brand-name directors had real power. After Heaven’s Gate, they had less or a lot less. It brought about the near-total collapse of a general belief that movies were mainly about directorial vision, at least in the hands of a celebrated few, and it emboldened the corporate guys and led to a mindset by which movies began to be seen as top-down, kid-friendly, high-concept product.

My favorite Cimino film is probably Year of the Dragon, although I wasn’t exactly a fan of it. I liked Mickey Rourke‘s tough-cup swagger…his suits and his “mood hair” (a term coined by Elvis Mitchell) and his barking manner.

I know that I didn’t care at all for The Deer Hunter when I first saw it in ’78, and that I’ve never re-watched it at all in the decades since. There were portions of The Deer Hunter that I despised — the over-produced feeling, the Russian folk tunes, the fake Pennsylvania mountains that were shot in the Pacific Northwest, that awful Russian roulette device. The only things I really liked about it were some of the performances (particularly those by Robert De Niro, Meryl Streep, John Cazale) and the singing of “God Bless America’ at the end. 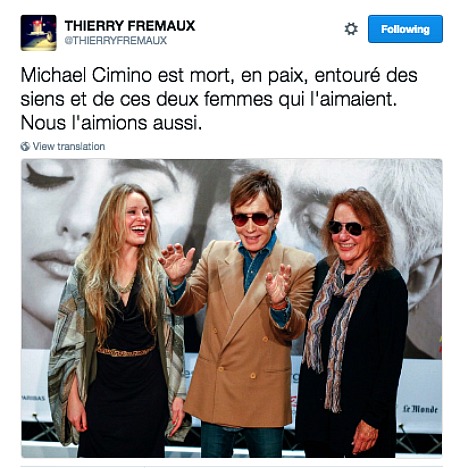