Do you think the words “rules” and “apply” are mentioned often enough in this spritzy new trailer for Warren Beatty‘s Rules Don’t Apply (20th Century Fox, 11.23)? As well as “crazy”? It doesn’t feel so much like a “dramedy”, which is what Beatty has been calling it, as a restrained screwball comedy, like something Carole Lombard, James Stewart and John Barrymore might have made in the late ’30s. The background music (a little like “Tequila”) reflects the late ’50s era in which the story unfolds, but Beatty also uses some ’40s big-band swing. Either way a tone of old-school, high-strung wackiness has obviously been threaded in. Which is cool.

The audience will skew somewhat older, of course — forget the Millenials — and because of the classic screwball-farcical tone I’m presuming that the know-it-alls will mutter that it’s not audacious, deep or heavy enough to warrant award-season chatter. Ask any seasoned Oscar campaigner — funny stuff always gets elbowed aside.

But the story drops anchor in the third act, I can tell you. I know what happens chapter and verse, and just hearing it got to me. And it is about values and the things that endure. And it is doing something unusual — arguably novel in the year 2016 — and that at the very least warrants attention and respect.

My strongly held view is that the best way to ignite positive chatter about Rules Don’t Apply and thereby launch it with an attractive narrative is to take it to the Telluride Film Festival. Not Toronto, mind, but friendly, cozy, convivial Telluride, where Beatty can roam around and work the crowd.

If it even half-works the Telluride film critics (many of whom are still in thrall to the Beatty legend) and early adopters will shout whatever praise they might have in mind, and then it can open two and half months later with that chorus of approval behind it. If it just “opens” in the market in the usual way, it’ll get whatever reviews it gets and attract an appreciative 45-plus audience for a weekend or two and then slip into VOD/streaming/Bluray.

Variety‘s Joe Leydon opines: “I notice it’s opening around Thanksgiving. Maybe it’ll turn out to be one of those holiday releases that does relatively well because it’ ll be the only film everyone in the family can agree on seeing together during the long holiday weekend.”

For me, the most interesting line in the trailer is one that sounds like it’s about sex: “Once you’ve been intimate [with someone], in the eyes of God you’re committed to that person for the rest of your life.” Beatty’s dramedy focuses on a pair of straightlaced Howard Hughes employees and lovers-to-be, played by Alden Ehrenreich and Lili Collins, but when Ehrenreich says the line he could also be talking about spiritual intimacy, and more particularly Beatty’s feelings of intimacy — kinship – with the legendary Hughes.

Beatty’s notion of making some kind of Hughes film goes back to the ‘mid 70s, and in terms of trying to develop a movie on paper his effort began in the early ’80s, which is when Bo Goldman turned in his first life-of-Hughes script. Beatty wanted to produce as well as play Hughes because of similarities in their natures — the fascination with power, the hunger for women, the privacy obsession, the eccentricity, the headstrong thing. (Beatty biographer Peter Biskind and others have noted this.) Beatty has been nursing his Hughes case for 35 if not 40 years. That‘s commitment.

Added Leydon observation: “I may assign this to my film history students, if any of them want to write an extra-credit essay comparing it to classic screwball comedies. I just hope Beatty doesn’t mind that I’m using his movie as a teaching tool. And assigning it as homework.” 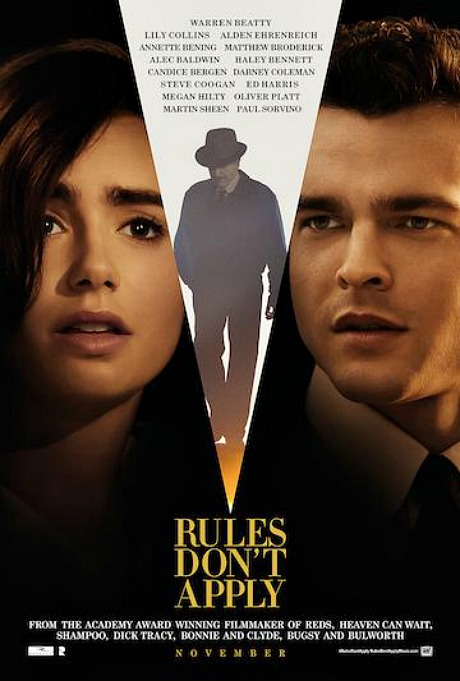