For Those Who’ve Never Seen It

Several months after the all-too-brief release of James Bridges‘ Mike’s Murder on 3.9.84, a short review by New Yorker critic Pauline Kael was published. Here’s a portion of it:

“A few days after seeing the newly manufactured, disposable Legal Eagles, I noticed that Debra Winger‘s last picture to be released, Mike’s Murder, was listed for Showtime in the New York Times TV schedule, and that the Times‘ advice was ‘Skip it.’ Please, don’t skip it next time it comes around — or, if you can, rent it. 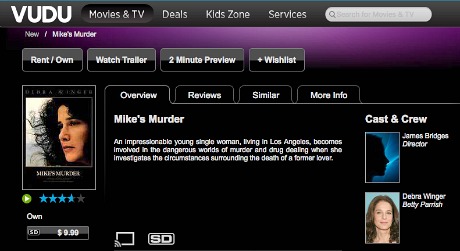 “I wasn’t able to see this film during its unheralded, minuscule New York run in 1984, but I caught up with it on HBO last year…[I]t has two superb performances — a full-scale starring one by Winger, and a brief intense one by Paul Winfield. She’s a radiantly sane young bank teller who has an affair with Mike (Mark Keyloun). She likes him — you can see her eagerness, even though she knows how to be cool and bantering with him…

“Winger has thick, long, loose hair and a deep, sensual beauty in this movie. Bridges wrote the role for her after directing her in Urban Cowboy, and you feel the heroine’s expanding awareness in Winger’s scenes with Keyloun and her scenes with Winfield. It’s a performance that suggests what Antonioni seemed to be trying to get from Jeanne Moreau in La Notte, only it really works with Winger — maybe because there’s nothing sullen or closed about her. We feel the play of the girl’s intelligence, and her openness and curiousity are part of her earthiness, her sanity.

“There’s a marvellous sequence in which Mike calls her after an interval of three months and wants her to come to him right that minute. She says, ‘How about tomorrow night?’ He says, ‘You know I can’t plan that far in advance,’ and gets her to talk to him while he masturbates. He says he loves her voice, and though we don’t see him, we hear a callow sweetness in his tone; he wants to give her satisfaction, too.

“I don’t know of anyone besides Winger who could play a scene like this so simply. She’s a major reason to go on seeing movies in the ’80s — but not in Legal Eagles.”