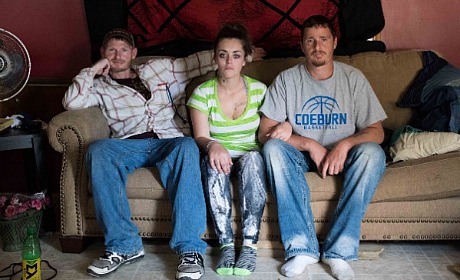 Wells comment: For the 678th time, religion has always been founded upon ignorance and superstition, and 35 or so years ago Christianity was hijacked by the right. I hate to break it to you, Gomer, but Jesus doesn’t believe in AR-15s. And the more you repeat slogans like “diversity is a code word for white genocide,’ the more behind the eight ball you’ll be. Do you wanna stay in that hole you’re in, or do you want to climb out?

(3) “The only thing they feel they can do is break the fucking system. And they are going to try. Either by Trump or by some other way.”

(4) “Voters in the lower tier want to move to the higher tier. For African-Americans that means supporting the Clintons, who have spent 40 years working to convince African-Americans they will work for them, socially and economically. They may not like where they start, but Hillary is clearly working for them.”

(5) “Many working class whites presently don’t feel they have that. In the past they voted the same as elite Republicans, who they saw as sharing their values and would move them higher.”

(6) “That hasn’t happened. Economically or socially. The bailout of Wall Street (and in their view, acquiescence on social issues like gay marriage) was the final blow.”

Wells comment: You’re shattered by the Wall Street bailout, and so you’re voting for the biggest, richest, most obnoxiously me-me-me guy who ever ran for President — a selfish, swaggering buffoon who’s putting on an act so you’ll vote for him, and you’re dumb enough to do that? You know what? You deserve to live in pain. Your lethargy is warranted. Pop another Oxycontin.

(6) “Frustrated with broken promises, they gave up on the knowable and went with the unknowable. They chose Trump because he comes with a very high distribution. A high volatility. He also signals, in ugly ways, that he might just move them, and only them and their friends, higher with his stated policies.”

Wells comment: If there’s a God, things will only get worse for you guys. Here’s hoping.

Read the whole piece. It says some horrible things, but it’s very perceptive

July 1, 2016by Jeffrey Wells17 Comments
« Previous post
So Many Summers Ago
Next post »
Much Better War Dogs Trailer