Incidentally: I caught a screening of Cafe Society Saturday evening at Soho House. My initial viewing was in Cannes, where it got a few more chuckles. (Here’s my mezzo-positive review.) The Soho House screening room is heaven — easily the most luxurious, ass-friendly facility in town. I attended with HE’s own Svetlana Cvetko and producer-editor David Scott Smith. There was a lovey-dovey couple in their 40s sitting in front of us, huddling and kissing before the film began. They bailed 20 minutes before it ended. As they were ducking out I was bad-vibing them. ADD sufferers, lightweights, etc.

Review excerpt: “Thematically Cafe Society is a re-scrambling of Crimes and Misdemeanors, Husbands and Wives and Bullets Over Broadway. It lifts off the ground, but with re-heated steam. And yet it’s pleasing and handsome (a combination of digital, amber-lit photography by the great Vittorio Storaro and exquisite ’30s-era production design by Santo Loquasto) and is very appealingly acted, especially by Stewart, secondarily by Eisenberg.” 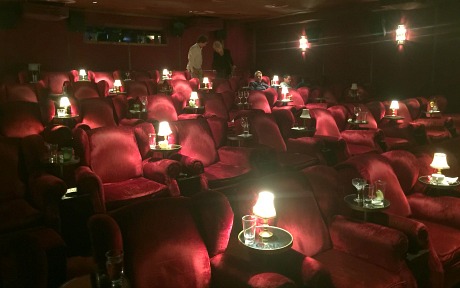 Soho House has an iron-clad rule about no one snapping pics of their screening facility. That was before I came along. Never wave a cape before a bull. On top of which there are all kinds of photos online.

July 11, 2016by Jeffrey Wells6 Comments
« Previous post
Cranston as Trump
Next post »
Will Clinton Essentially Ignore What The Whole Primary Season Was Largely About?