I was scratching my head this morning about three big New York Film festival picks that have recently been announced — Ava Duvernay‘s The 13th to open, Mike Mills‘ 20th Century Women as the centerpiece, and now James Gray‘s The Lost City of Z to close.

My honest gut reaction was “these films don’t seem to radiate the upscale pot-stirring pedigree that NYFF selections have in the past. So what’s going on here?” 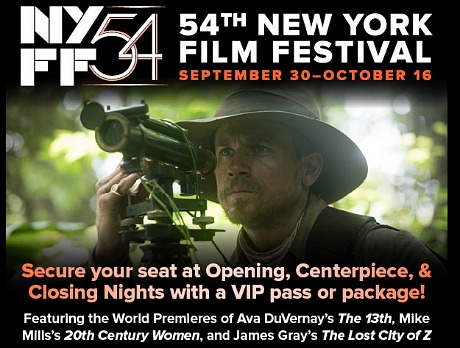 Ever since the 2010 NYFF launched with The Social Network people like me have been looking to NYFF films to provoke, get people talking and occasionally figure in awards-season discussions.

I’m sorry but The 13th, 20th Century Women (which I’ve heard stuff about) and The Lost City of Z just don’t strike me as rock ‘n’ roll. They certainly don’t match anyone’s concept of upscale, dweeb-curated, Amy Taubin or Dennis Lim-approved, possible-award-conversation-level movies that the NYFF has tended to favor in the past.

They seem to me like the kind of films that respectable second-tier festivals (Seattle, Savannah, Key Key West) would highlight and make a big hoo-hah about.

Duvernay’s doc is about the passing of the slavery-ending 13th Amendment. Okay, but again? After 2012’s Lincoln and 2013’s 12 Years A Slave we have to submit to another lesson about what an evil thing slavery was, and what a herculean achievement it was to legislatively end it?

I heard last night from a guy who caught last night’s research screening of 20th Century Women at the AMC Lincoln Square, and he said (a) “nope,” (b) “meh” and (c) “maybe some critics will like it.”

And it is written in stone that anything starring Charlie Hunnam and costarring Robert Pattinson must have issues of one kind or another, even with James Gray steering the ship and the legendary “James Gray cabal” standing foursquare behind it.

I asked NYFF honcho Kent Jones whether he may have been compassionately aced out by the award strategists for whatever reason? Did Telluride, Venice and Toronto scarf up all the goodies? Because this doesn’t figure.

Jones replied as follows: (1) “All I can say is, to each his own. And no, we weren’t aced out of anything, either compassionately or brutally. Nor did we wind up ‘settling’ for anything”; (2) “Personally, I thought that Lincoln was a great movie. And I love all three of the gala films”; and (3) “Any alignment between our gala selections and awards-season stuff is purely coincidental. If we were inviting films because we thought they were ‘awards season-worthy,’ then we wouldn’t be doing our jobs.”

I think Jones should have picked Olivier Assayas‘ Personal Shopper for one of these berths. That, at least, would raise hackles, get the conversation going, ignite strong pros and cons. The three films Jones has chosen thus far may have their virtues in this or that regard, but the notion of watching them is, no offense, putting me to sleep as we speak.

August 3, 2016by Jeffrey Wells4 Comments
« Previous post
While Trump Followers Revel In Ugly, Media Guys Say Campaign Is In Chaos
Next post »
Rotten Tomatoes Refusing To (a) Alter Suicide Squad’s Crummy Aggregate Rating, Or (b) Shut Itself Down