As I wrote last night, Daniel Noah‘s Max Rose (Paladin, 9.2) is solemn, well honed and salutable. I love that Noah had the decency not to try to charm or tickle me into submission. It’s a melancholy film in some…okay, most respects, but not a downer because Lewis is so interesting to watch. His performance isn’t “performed” — he just divvies out a series of straight, no-bullshit, take-it-or-leave-it cards. These cards create a vibe, an aroma of hurt that doesn’t want to be sniffed or shared. But there it is nonetheless.

The trailers have told us that Max Rose is about the titular character, an elderly but mostly unbowed jazz pianist (Jerry Lewis), coping with a realization that his recently deceased wife Eva (Claire Bloom) had been unfaithful to him since the ’50s. 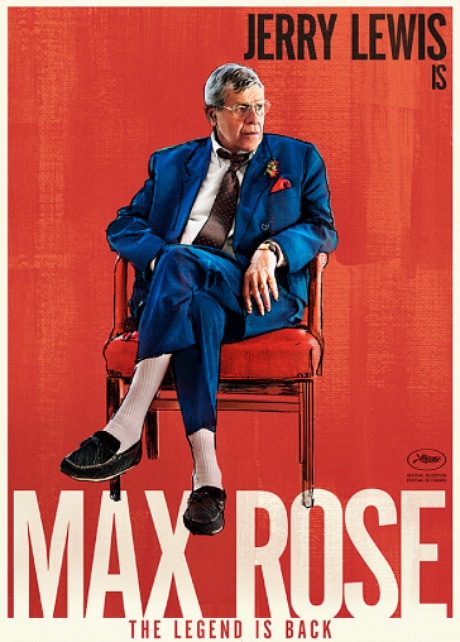 But Max has already digested this news before the film begins (thank God!), and so we’re spared the heartache scenes. Max, who’s been written as a riff on Lewis as well as The King of Comedy‘s Jerry Langford in his dotage, just sits there and more or less takes it like a man. He keeps to himself for the most part, meditating, scowling a bit. For me Lewis’s silences are a master stroke. He lets you sense what he’s thinking and feeling, and in so doing is spared the verbal effort, and the payoff is that much more than if Noah had written him pages and pages of dialogue.

Event-wise two things happen. Max’s frailty prompts his son (Kevin Pollak) and granddaughter (Kerry Bishe) to move him into a pricey assisted-living facility, and then sell his Los Angeles home to pay for this. But before moving out Max has found a gift (a snap-shut locket with a romantic inscription) that Eva’s boyfriend gave her in 1959. The guy’s name is Ben Tracey (Dean Stockwell), we’re eventually told. The climax comes when Max finds Tracey’s home and pays him a visit. I won’t spoil any further, but that’s what happens.

Lewis and Pollak have a couple of good scenes together. Okay, one good one. Max obviously hasn’t been the most loving of fathers, and Pollak’s son, Chris, gives him a little sarcasm about this. It’s well aimed and well expressed. Pollak knows from quietly bitter.

If you ask me Bishe’s Annie Rose is a sort of minor villain. Max is kind and gentle with her, offering as much love and sensitivity as he’s able, but she’s one of those emotionally repressive family members who insist on treating their doddering elders like basket cases who need to be attended to and emotionally controlled at all times.

When Max begins to talk about Eva’s infidelity at her memorial service (“Our marriage was a lie”), Annie stands up and hushes Max and guides him back to his seat, basically treating him like the village idiot. Who the fuck is she to tell Max what to say or not say when speaking about his lifelong partner? She shows no respect. And then when Max shows her the locket and tells her Eva had a lover, Annie goes into denial and says it could mean anything, etc. Yes, she eventually realizes the infidelity was real, but her first response, again, is to say “no, no, Max…don’t go there, put it aside.” An infuriating character. I hate people like this.

Repeating: The respect and satisfaction I’m feeling was a tiny bit surprising given the film’s difficult experience at the 2013 Cannes Film Festival. After negative reactions were voiced following an early screening, a press screening was cancelled. And that was over three years ago. But here it is, and I’m not sensing what the problem might have been to start with. Noah told me after Thursday night’s screening that a character played by Fred Willard was completely cut out.