There was a brief, horrific two- or three-week period last September when it seemed as if Lenny Abrahamson‘s Room, which 90% of female cognoscenti and quite a few girlymen critics adored, might become the emotional favorite and thereby nudge aside Spotlight, which was clearly the cultivated-journo favorite in the wake of Telluride-Toronto, for the Best Picture Oscar.

A ghastly sense of foreboding gripped my soul as I began to realize how strongly many people felt about Room. That anecdote about a woman weeping in the Academy lobby told me it was fait accompli. The prospect of a Room victory felt like a spear in the side. But all of that Best Picture talk went away pretty quickly, didn’t it? Because it became increasingly clear that more people were on my side of the equation, and the Room crowd realized by late October or thereabouts that their only realistic shot was Brie Larson winning the Best Actress Oscar, which of course she did.

But thank God Room was defeated. The world came to its senses! We’ll be stuck with cloying Jacob Tremblay for the next few years (Before I Wake, Shut In, The Book of Henry, Burn Your Maps, Wonder are due in ’16 and ’17) but them’s the breaks.

I was just re-reading my initial Toronto review and the horror just came whooshing right back:

Vanity Fair‘s Katey Rich was a serious Room fan. She made this clear during a post-Toronto “Little Gold Men” podcast (9/24/15), in which she was joined by VF‘s Mike Hogan and Richard Lawson. I loved the portion when Lawson said that “after the first press-and-industry screening of Spotlight everyone was saying ‘this will win Best Picture’,” and Rich, clearly alarmed, said “It’ll win?”

On top of which there was a brief derogatory mention of yours truly -— “the Jeff Wellses of the world and the notorious Hollywood Elsewhere.” Hah!

In the same podcast Lawson or Hogan (they sound alike) said that Sandra Bullock delivers a “pretty great” performance in Our Brand Is Crisis — that movie sank like a fucking stone. Lawson predicted that Bridge of Spies might win Best Picture, Hogan said he was “throwing down” with The Revenant while Rich was sensing that David O. Russell‘s Joy might take the crown. Who knew?

I’ll tell you who knew. I knew. I knew Spotlight would be nominated for sure, and that it would come down to Spotlight vs. something else, probably The Revenant. 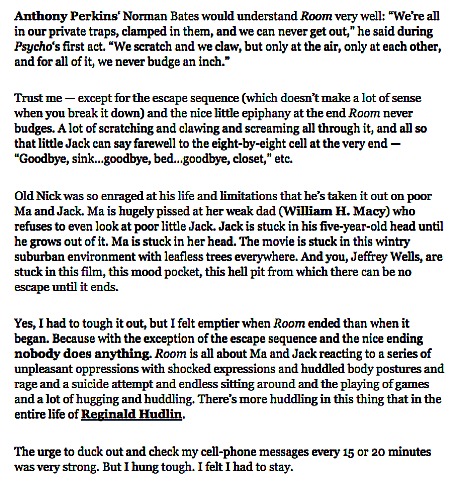 August 21, 2016by Jeffrey Wells24 Comments
« Previous post
Women In Love Bluray Is Only Days Away…
Next post »
Pattonesque