Every so often I’ll briefly space out when talking to actors or directors in high-pressure situations. It happens infrequently, but it happens. Fatigue, social cowardice…something. I’ll stop listening for a few seconds, lose focus and briefly retreat into some private realm. And then I’ll snap back.

I’ve never admitted this. At the same time it’s not a big deal. I’ve never embarassed myself or blown an interview because of these lapses. It’s just a small bug in the system.

It happened a few weeks ago when I was talking with Casey Affleck at a Manchester By The Sea party at the Toronto Soho House. I left my body for four or five seconds. Affleck noticed I was floating upwards and turned his attention elsewhere.

Three years ago I briefly spaced out when I was sitting next to David O. Russell and Jennifer Lawrence at an American Hustle party. “Jeffrey, why are you frowning?” Russell asked. “You’re sitting at the best table at the party.” If I had answered “I’m just having a space-out moment,” Russell would have felt insulted. I was angry with myself a bit later. Why did I do that?

My reaction to Maggie Chiu‘s People magazine story about Darren Aronofsky and Jennifer Lawrence “casually” dating is one of…what, casual acceptance? Mild amusement? Casually involved means…what, expecting things to be over in a few weeks? Darren is a seasoned zen smoothie from way back. HE approves of any and all relationships that bestow light and comfort and accelerate the pulse. I’m stuck, however, about what brand-blending name to use if they last a while. Lawnofsky?

DVD Beaver‘s Gary Tooze on Criterion’s One-Eyed Jacks Bluray, which pops on 11.22.16: “The colors are stunning…the restoration magnificently maintains the integrity of the film’s colors, and source density. Being hyper-critical it looked a shade thin to me in a couple of spots and very minor edge-enhancement. But for the most part this is an absolutely mesmerizing image in-motion. I was floored. Wow.”

But to my eyes, the 1.85:1 frame captures that accompany Tooze’s review offer proof that the projected version I saw in Cannes was masked at 1.75:1 or possibly with an even boxier a.r. I know exactly and precisely what I saw on the screen at the Salle Bunuel, and those images definitely had more height than what Tooze is presenting here.

Posted from Cannes on 5.16.16: “The Jacks a.r. didn’t look like 1.85 to me — it definitely looked more like 1.75. Speaking as an ex-projectionist and an a.r. fanatic second to none I know exactly and precisely what 1.85 vs. 1.75 are shaped like, and I’m telling you there’s an ample amount of headroom in every shot. To my enormous relief Jacks didn’t feel cut off or cramped in the slightest. And that, to me, meant higher than 1.85.

17 Comments
All Those Years Ago (Ray, Aviator, Sideways) 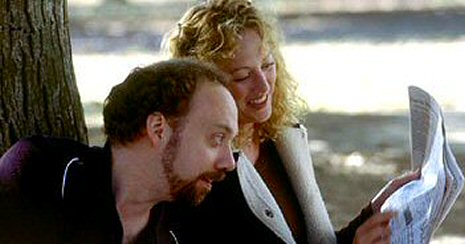 Michael Moore in Trumpland “doesn’t shock or enrage,” writes N.Y. Times critic Neil Genzlinger. “[For] Mr. Moore has basically made an earnest but not very entertaining pro-Clinton campaign film, occasionally funny [and] momentarily heartfelt when he takes up the subject of universal health care and the lives lost for lack of it.

“Moore’s [stage] performance in Wilmington, Ohio was filmed just as the 2005 tape that captured Mr. Trump talking about groping women was hitting the news; Mr. Moore’s stage material contains no mention of that controversy, which has since consumed the presidential campaign. So at this juncture his film is, if nothing else, a stark contrast to all that has transpired in the last couple of weeks. It’s surprising to hear someone extolling a candidate’s virtues rather than just harping on what’s wrong with the opponent — it’s surprising to hear, in other words, why we should elect someone rather than why we shouldn’t.”

High-profile Casey Affleck profiles are starting to pop up. They’re all saying his Manchester by the Sea performance (i.e., the sullen, broken-hearted Lee Chandler) is the crowning achievement of his career. 19 out of of 22 Gold Derby “experts” (myself among them) now have Affleck as the most likely Oscar champ in the Best Actor category. I’ve posted this a couple of times before, but ten minutes after Manchester By The Sea finished playing at Park City’s Eccles theatre on 1.23.16 I said Affleck’s performance was “locked” for a nomination. I knew what I’d seen and felt.

The only thing could get in the way is…well, Casey isn’t all that great at lightweight banter and fooling around and being glib on talk shows. It’s just who he is. He’s quiet but a good guy. That Stephen Colbert contretemps was hilarious.

Posted on 1.23.16: “Affleck has delivered the finest, most affecting performance of his life, and in part because he’s lucked into one of the best written lonely-sad-guy roles in years, and because the part, that of Lee Chandler, a Boston janitor and handyman struggling with a horrific mistake that has wounded him for life, taps into that slightly downcast melancholy thing that Affleck has always carried around. It’s like when Gregory Peck played Atticus Finch in To Kill A Mockingbird -— it’s one of those legendary perfect fits.”

One of the most frightening wake-ups of my life happened during a cross-country road trip. Three of us in a large Oldsmobile of some kind. We were on a two-lane blacktop somewhere in western Oklahoma, and I’d been sleeping scrunched-up in the back seat. Maybe 6 or 7 am. Somewhere in the recesses of my dawning consciousness I heard the angry chant of 15 gorillas — “Ooo-kachaka! Ooga-ooga-ooo-kachaka! Ooga-ooga-ooo-kachaka!” — getting louder and louder. I was muttering to myself “fuck is that?” and then suddenly a switch was thrown and I felt terrified. Gorillas! I sat up and realized a second later where I was and what I was hearing — Blue Swede’s “Hooked On A Feeling.” I’ve never forgotten that moment, and I never will.