Support on Patreon Follow @wellshwood
21 Comments
“If You Don’t Become The Ocean, You’ll Be Seasick Every Day”

As I don’t “do” kiddie movies for the most part, Juan Antonio Bayona‘s A Monster Calls (Focus, 12.23) just isn’t for me. If the family trade decides to love it and spread the word, great…knock yourselves out. But it made me feel as if a little mosquito virus had gotten into my brain. I was thinking about sneaking out less than half-hour in.

Patrick Ness‘s 2011 novel is a respected fable about a young lad (Lewis MacDougall) with a sick mom (Felicity Jones) who gets to know a friendly tree giant whom no one else can see, at least not initially. The giant, of course, is a metaphor for the fervent imagination of a boy coping with grief and the cruel pestering of classmates. And after the tree giant tells three tales, the lad must stand up and tell his own…I’m sorry, where was I?

If only the gifted Bayona hadn’t decided to ignore the kind of subtle, tingly approach that made The Orphanage (’07), which he directed with the alliance of producer Guillermo del Toro, such a brilliant classic. But he has. It’s like Bayona’s Spanish-speaking self directed The Orphanage and his wily, opportunistic, Hollywood-fellating twin brother flew to the States and directed A Monster Calls.

Clearly aimed at the easily impressed, A Monster Calls is expensively CG-ed but grossly unsubtle — it insists on spelling out every little plot turn and implication in underlined boldface. I’m sorry but any film that starts off by immersing the viewer in a seriously nightmarish scenario only to show the main protagonist suddenly waking up from said nightmare, sweat-soaked and hyperventilating…well, that’s a cliche.  And so the film must be automatically dismissed. I’m sorry but that’s a hard and fast rule.

President Barack Obama is a wise, dignified, intelligent man who believes in process and mutual respect whenever possible, but I’m feeling nauseous just looking at Donald Trump sitting in the Oval Office. Really — I feel sick. Slightly more American voters voted for Hillary Clinton on Tuesday than for Trump — just remember that. And remember how many women voted for Trump, and how many African-Americans and Hispanics. You forehead-slapping morons. One more thing: We’re about to inaugurate a President with the biggest pot belly since William Howard Taft. (Lyndon Johnson was a large, full-bodied man, but his stomach didn’t bulge out like Trump’s.)

118 Comments
HE to Sasha Stone (And All The Millions of Liberals Who Looked The Other Way When It Came To Hillary’s Shortcomings, Myself Included)

The two biggest seismic political events to happen over the last 18 months were the candidacies of Donald Trump and Bernie Sanders, and that’s because they both were tapping into the same fundamental rage that beaten-down middle-class schlubs were feeling, and talking about serious overhaul. Hillary Clinton beat Sanders and took the Democratic nomination, but she was, is and always will be a moderate-centrist status quo poll-watcher with an attitude of whatever-works accommodation. Her voice lacked Sanders’ conviction and authenticity. It was obvious that Hillary was 15 or 20 times better than Trump, and so I voted for her. But too many millions didn’t like or trust her. Sasha told me the other night that our friendship is over because I helped to defeat Hillary by complaining about her eye bags and braying voice and whatnot, and that’s fine if she wants to play it that way. But this post-election riff by The Young Turks‘ Jordan Chariton, who’s nearly the same age as Jett, strikes me as intelligent, wise and highly perceptive. I’m sorry but I’m more with Chariton than with Stone. Things have changed.

(More…)
November 10, 2016 9:29 amby Jeffrey Wells
22 Comments
Obama Did It: A Frontline Reminder of The Event That Launched Trump’s Campaign

This Frontline report has been fully absorbed and chewed over, but Donald Trump almost certainly decided to run for president after President Obama kicked him around — okay, humiliated him — during a 2011 White House Correspondents Dinner. Helen Lewis, deputy editor of the New Statesman, told Frontline (or somebody) this was what did it. From this point on Trump was determined to have revenge. Those present at the event said Trump “looked furious” as Obama sliced and diced him. New Yorker writer Adam Gopnik said, “His head set in place, like a man in a pillory, he barely moved or altered his expression as wave after wave of laughter struck him. There was not a trace of feigned good humor.” Please — watch the first six minutes. Just the first six. (Thanks to producer-editor David Scott Smith for calling attention.)

November 10, 2016 8:58 amby Jeffrey Wells
9 Comments
Yeah, Nice Frowns. Except They Can’t Do Much About It Now. Four Years of Slobo-Hitlerian Hell. 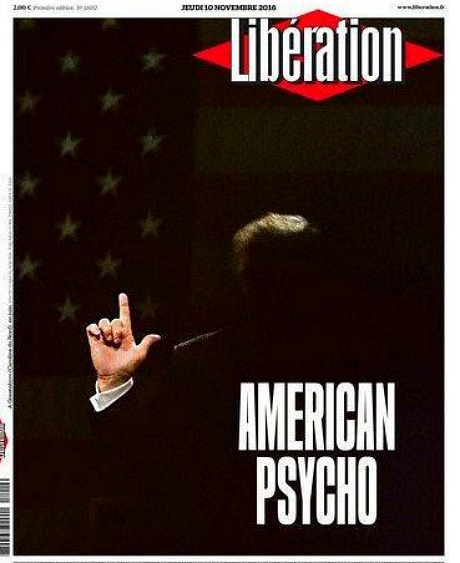 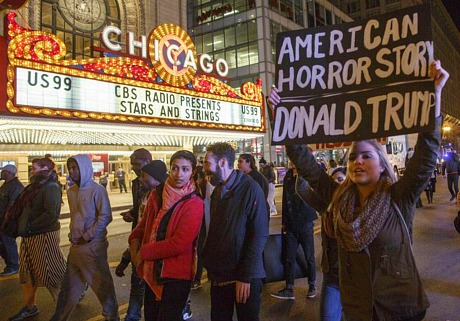